Ready as never before!

This time it will work: After increasingly positive developments around the pandemic and increased relaxations in various European countries, we are looking forward to the long-awaited start of the GC32 Racing Tour 2021 at the end of June.

Like all competitive sports, the lockdowns and security measures have paralysed the regatta world over the past 18 months. The GC32 Racing Tour management feverishly searched for solutions. But it didn’t help: Event after event had to be cancelled and the catamarans stayed ashore.

The Black Star Sailing Team used the time gained for a total overhaul of the boat and for meticulous preparations.

We also have a few weeks of intensive training on the Lake of Uri behind us. Our boat is now on its way to Portugal, the venue of our first regatta.

Training on the Lake of Uri

Like last year, we pitched our training tents in Brunnen Canton Schwyz this season – due to the already shortened tour schedule already in late spring, and not during the summer break as originally planned.

This time we had the opportunity to station our container and the boats in the middle of the village, in the Föhnhafen. This gave us more presence, and our team, our work and our preparations could be experienced by the general public. Accordingly, the interest was great. In addition to interviews in the press and on television, we were also approached and questioned by passers-by, and our container, but above all of course the catamaran, were marvelled at, examined and photographed again and again. This allowed us to present our project and show how much work and teamwork, on land and on the water, are behind a successful campaign.

Once again, we experienced central Switzerland and the Lake of Uri from their best side. Despite initially low snowfall and cold and wet conditions, we were able to use every day to train the manoeuvres and optimise the procedures and trim settings. In addition to the personal experiences, the exchange with the coach on the support boat, photo and video recordings from the coach boat and from onboard cameras are also evaluated. The findings are incorporated into a trim table to gather clues for the future.

The first stop of the GC32 Racing Tour 2021 takes us to Lagos. Lagos is located at the most south-western tip of Europe in the Algarve. Due to its proximity to Cape St. Vincent, the port was already actively used in the past by Portuguese sailing ships that set out to explore the world’s oceans. In modern times, the place is known for hosting major international sailing events. This is the third time the GC32 class has been a guest in Lagos. After the first event in 2018, the World Championship took place in 2019. “For me, this was one of the best-organised regattas I have ever taken part in,” Christian Zuerrer, skipper of Black Star Sailing, is quoted as saying. “We go to Portugal with consistently positive memories and take the power of the mountains from the Lake of Uri – the heart of Switzerland, with us to start successfully into the 2021 season. Let’s rock the fleet!” 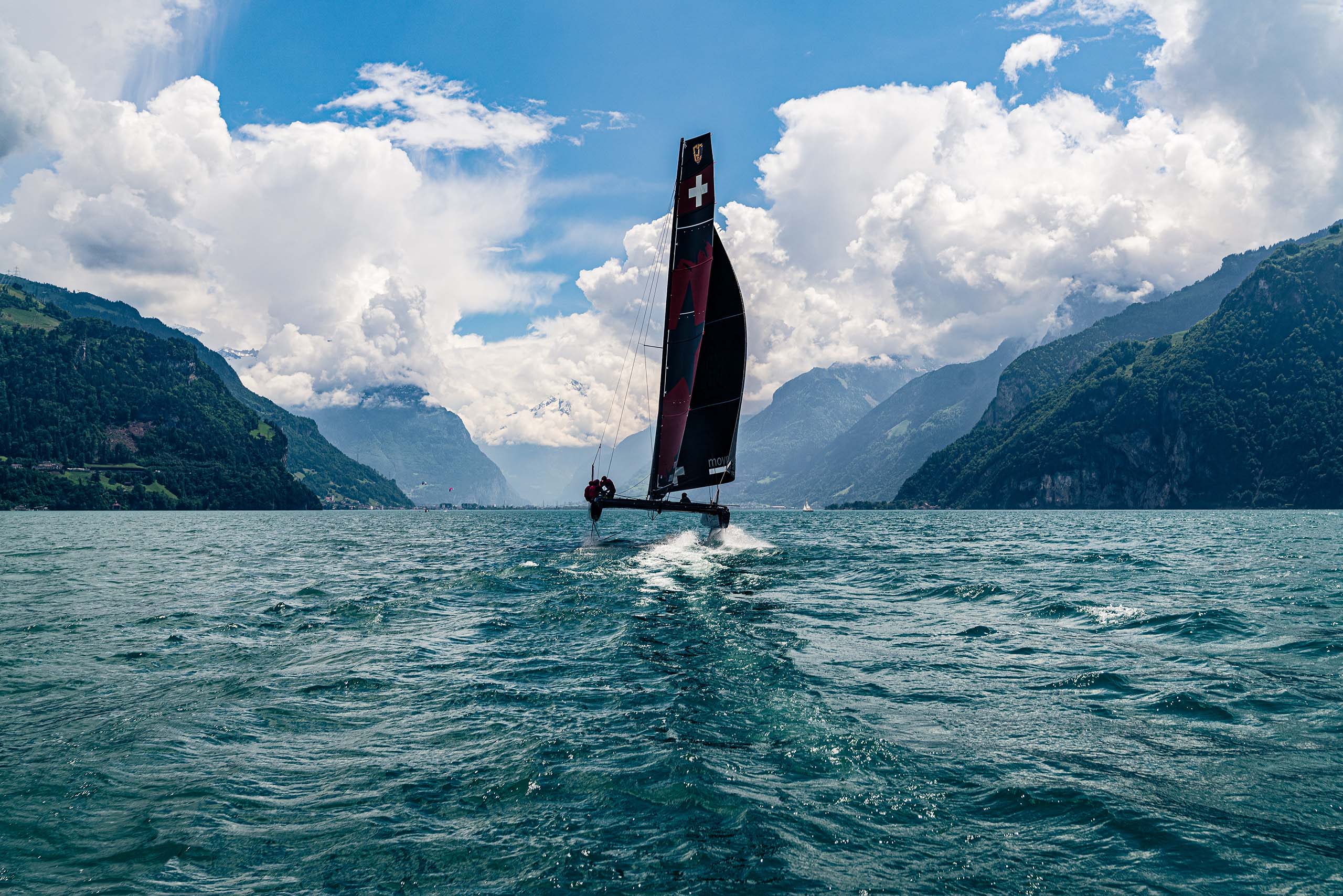 Against the impressive backdrop around Lake Lucerne … 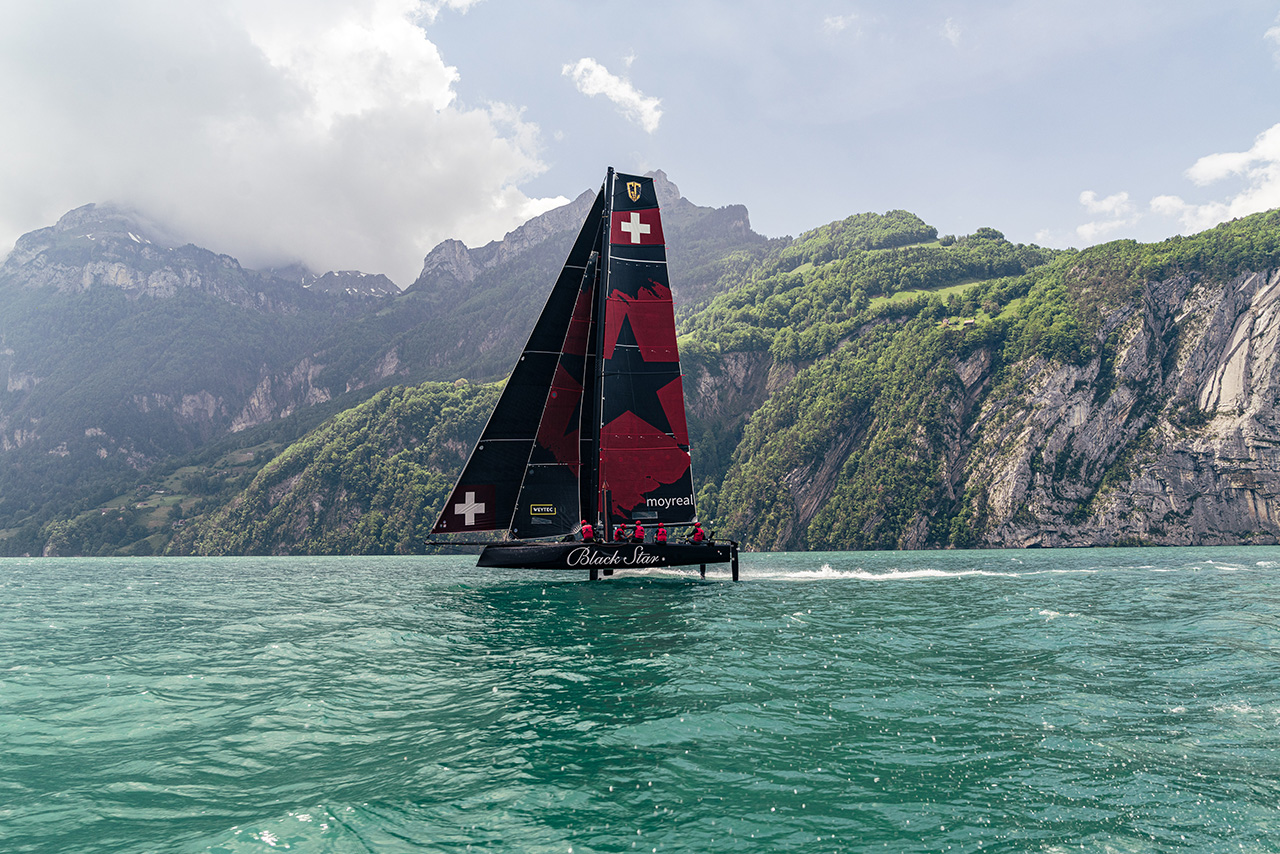 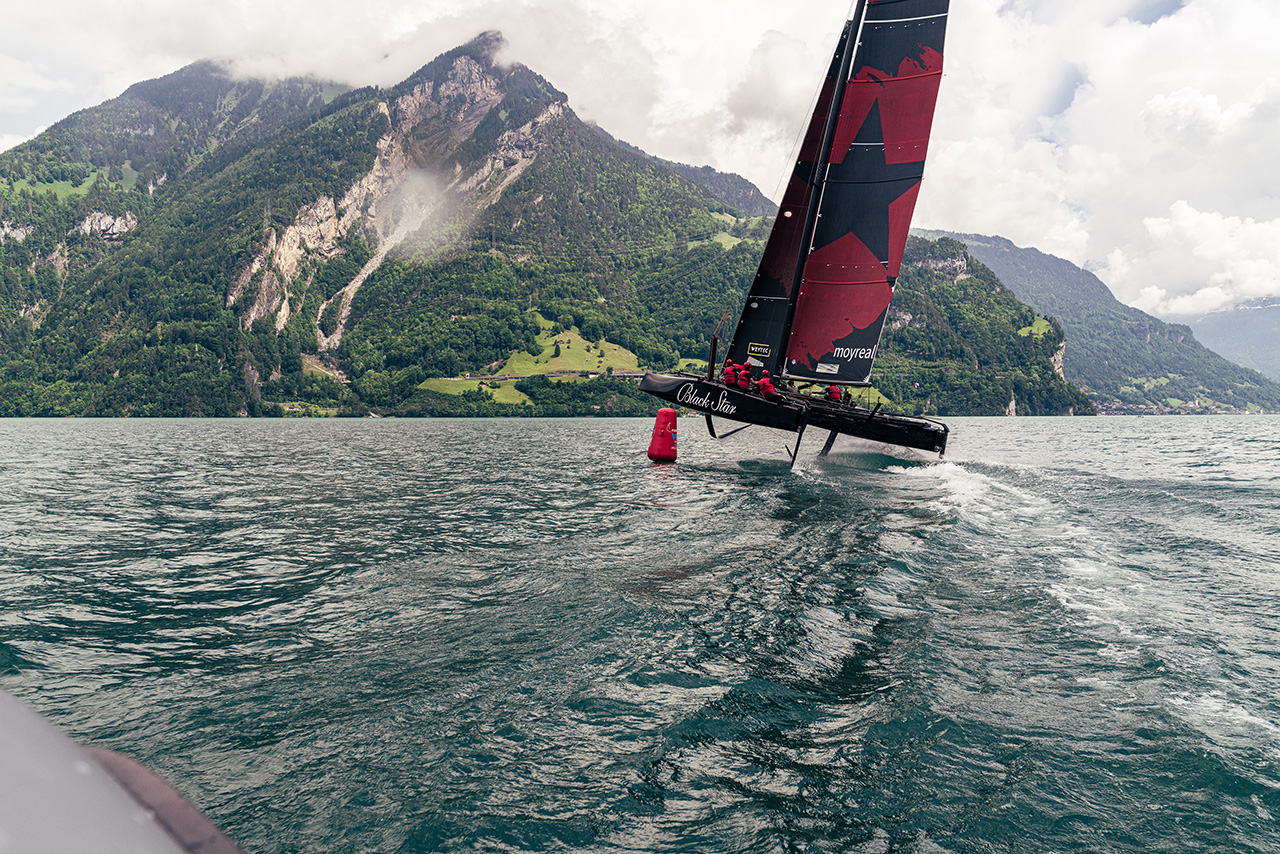 all the manoeuvres could be practised extensively. 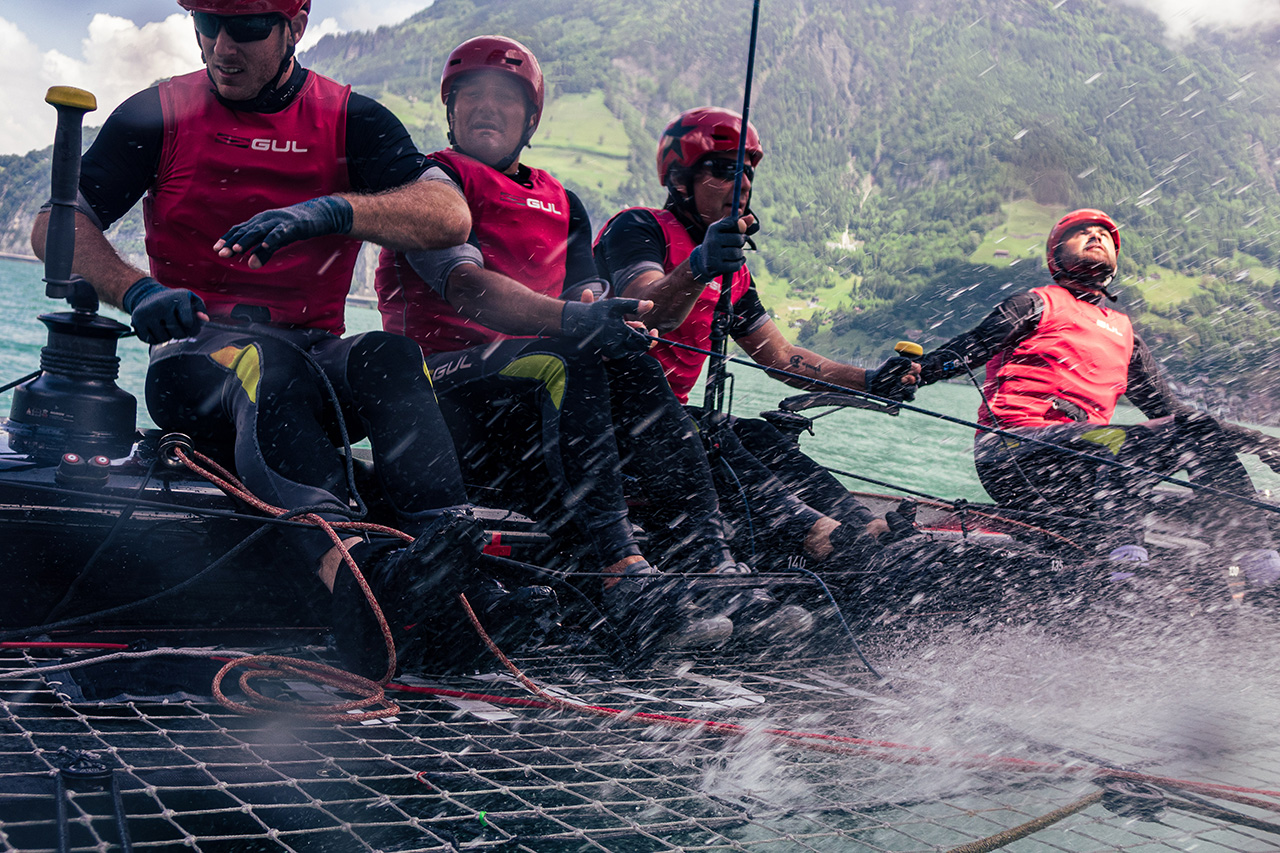 Although not in competition, everyone showed a lot of commitment … 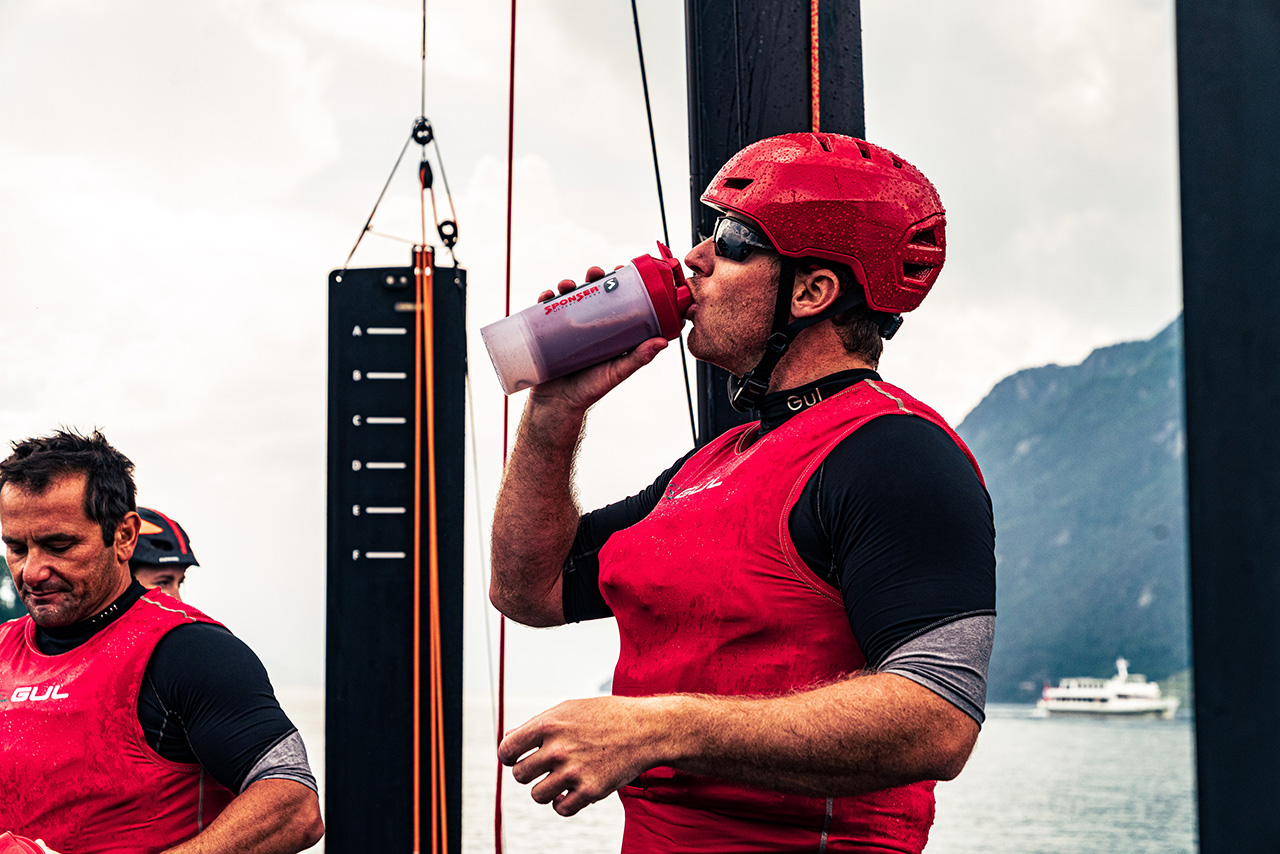 which was rewarded with regular breaks and copious amounts of protein.