The RC44 sailing yacht was developed jointly by multiple New Zealand America’s Cup winner Russell Coutts and Slovenian yacht designer Andrej Justin. The letters RC stand for the initials of Russell Coutts and number 44 for the boat length of 44 feet (13.35 meters). The monohull boat is based on an outer hull with conventional displacement – without hydrofoils. However, due to the adjustable keel with a trim tab, the concept is designed to be highly competitive and very versatile (hybrid) sailing. The complex carbon construction provides a stiff but light structure with a low centre of gravity. This, with the generous sail areas, provides remarkable performance with good handling. The open cockpit also allows the boat to be sailed short-handed. 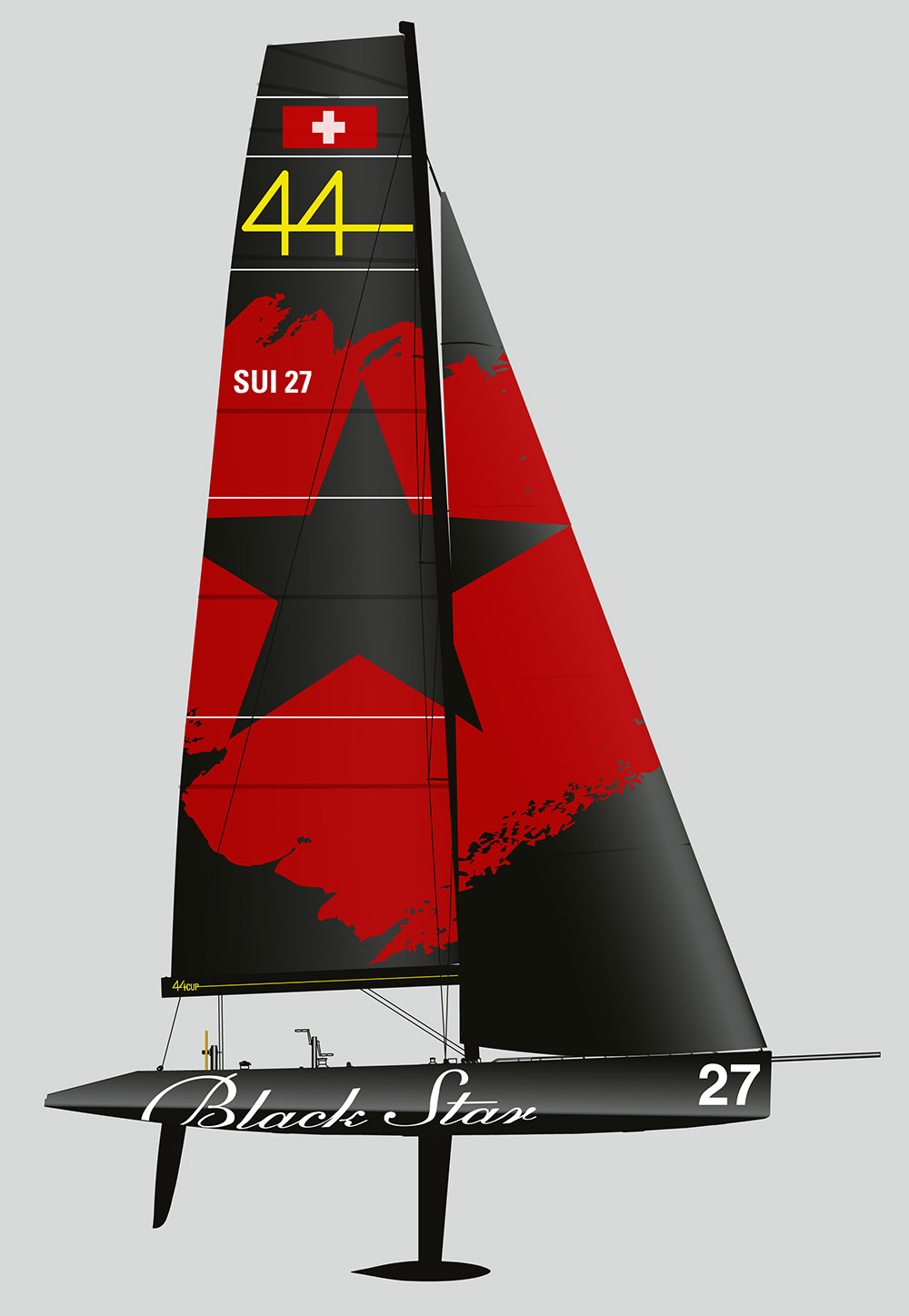 One design boat class for amateurs and professionals

The RC44 is a one design boat class with all the advantages based on these rules. Construction, hull shape, rigging and weight distribution are identical and strictly controlled. The sails are also strictly regulated. Together with the highly intelligent construction, which provides for easy transport in a so-called flatrack, the RC44 class allows for the participation in regattas without escalating costs.

The regulations of the 44Cup, the official RC44 racing series, also stipulate that at least two of the crew must be amateurs (as defined by the World Sailing Federation ISAF). This restriction gives teams with smaller budgets greater opportunities and makes it much easier to integrate young sailors. As a result, the RC44 boat class now enjoys a large following and is able to attract more and more amateurs as boat owners.

The RC44 racing yacht is made entirely of carbon fibre-reinforced plastic (CFRP) and is particularly light and therefore fast. In addition to the hull, almost all add-on parts are also made of CFRP: Mast, spreaders, main boom, bowsprit, rudders, steering wheels and keel fin.
Although an RC44 looks like a conventional yacht at first glance, it comes up with many innovations and a lot of know-how: The keel is adjustable. With a trim tab, the keel area can be reduced, which improves performance upwind, among other things, without sacrificing manoeuvrability. The deck layout also comes up with some innovations, among others the arrangement of the fittings was optimised in extensive tests with the match race crew of Russell Coutts. The geometry of the sails was designed in such a way that the boat also responds in light winds and performs excellently in stronger breezes to leeward and upwind.

The sum of these innovations makes the RC44 yacht a bit more complex to sail than other boats of comparable dimensions. But for regatta enthusiasts in particular, the well thought-out concepts open up countless possibilities to increase performance without subjecting the boat itself to individual optimisation – which ultimately makes it much easier to comply with the One Design regulations.

Efficient from bow to stern

With the RC44 concept, a boat class has been successfully established that reaches a reference level in terms of standards and performance and at the same time appeals to owners from the amateur camp as well. Thus, a decisive part of the RC44 concept is designed for manageable logistics: In addition to the bowsprit, the tail of the boat is also removable. This reduces the transport length to less than 40 feet. The mast also consists of two parts, so that the entire equipment including sails, rudder, keel, boom, mast and spare parts can be stored in a container and transported to any place in the world. The couplings and attachment constructions are well thought out so that assembly can be easily done in two days. Finally, all teams are supported by RC44 support to ensure that all boats are in optimum condition every time they go to the start line. 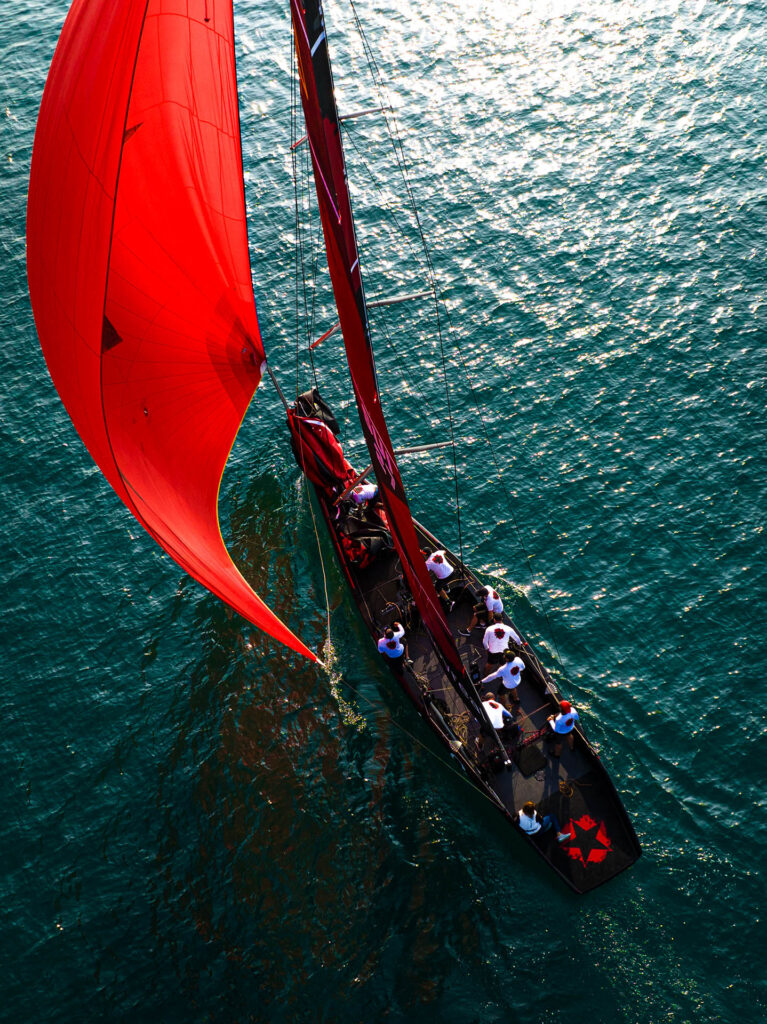 Since its inception in 2007, the RC44 Championship Tour has become one of the most important racing series on the international sailing scene. Over twelve years the class has become increasingly important, new venues have been added to the calendar and new teams have joined the fleet. In 2019, the racing series had grown so much that it was time for a revamp: the RC44 Championship Tour presented itself as the 44Cup.
The success of the boat class and the race series underlines the quality of the concept: the 44Cup allows amateur owners to compete in regattas around the world, competing against some of the world’s best sailors. The 44 history reads like a Who’s Who of racing: from America’s Cup legends to Olympic champions, countless sailing greats have campaigned on RC44 yachts over the past 15 years.

Black Star Sailing at the 44Cup

Racing in the 44Cup offers Black Star Sailing the opportunity to expand its team with juniors while being competitive in an extremely attractive racing series. Black Star Sailing is the first team in the 44Cup line-up to sail under the Swiss flag. Furthermore, Black Star is currently the only campaign in the world that competes in RC44 and GC32 regattas simultaneously.