The contrast could not be greater: after the world of regatta sports and with it the Black Star Sailing Team had to wait for competitions for what felt like an eternity, there is finally a lot going on again.
As we all know, the decision to participate in the 44Cup was not made out of boredom, but for well-considered reasons. Nevertheless, we still have to get used to our new, enormously dense event calendar. We are already in the middle of the build-up to the first GC32 Racing Tour regatta while we are still processing our baptism by fire at the 44Cup. 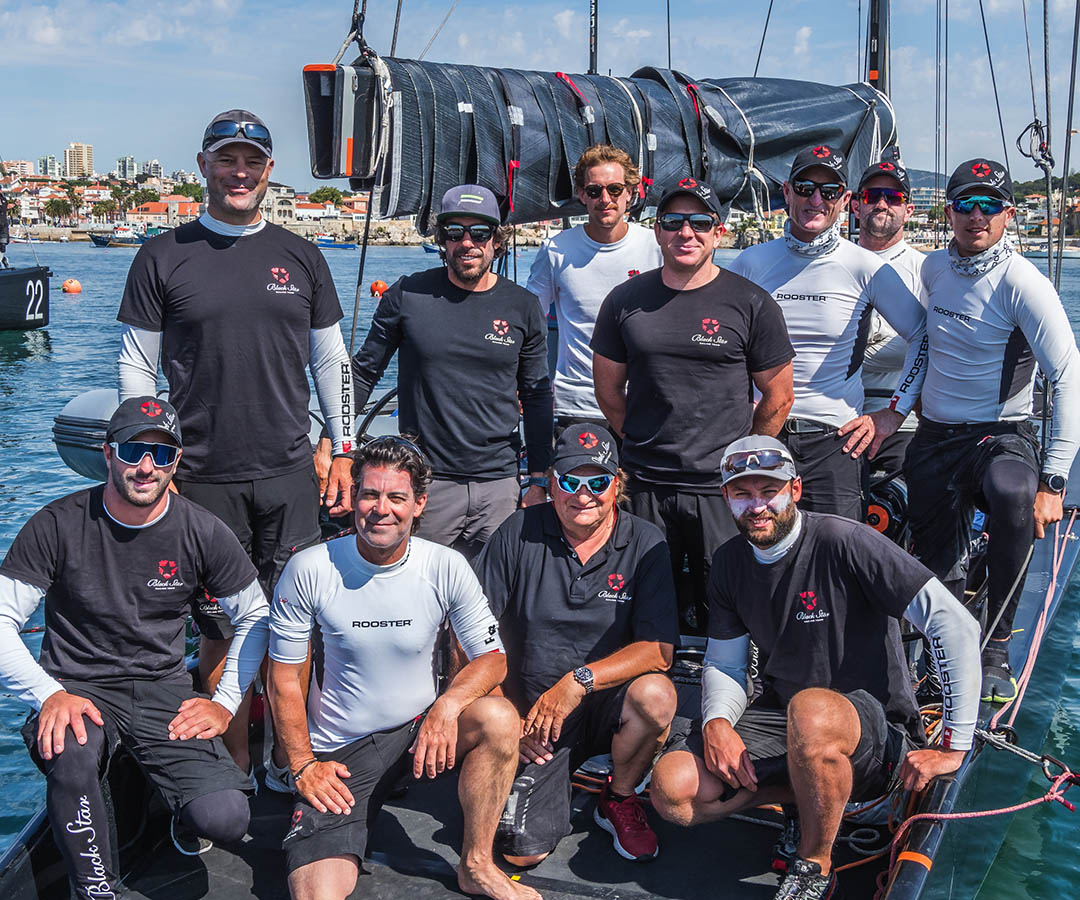 The contrast could not be greater in the boat classes either: While the GC32 Foling catamaran comes with extreme speeds, hectic pace and high physical stress, the RC44 is also not for beginners. Quite the opposite. The sailing yacht designed entirely for regattas, penned by Russell Coutts and Andrej Justin, comes up with countless technical refinements that make the boat faster and more competitive. At the same time, it is also much more complex to race. The difference is ultimately made by the opposing concepts: despite being equipped with countless innovations, RC44 yachts continue to rely on conventional displacement, while foiling catamarans go completely different ways. The two boat classes are also opposites in racing and thus demand all the skills of the crew.

Nevertheless, we went to our first start at the 44Cup Cascais with high expectations, and were disappointed – at least as far as the classification was concerned. We were assured by various sources that the Black Star Sailing Team’s debut in the RC44 class was better than some of the other teams of previous years. But that is little consolation. Or to put it in the words of skipper Christian Zuerrer: “Everyone who competes wants to win. And those who don’t win are disappointed. The Olympic motto ‘Taking part is more important than winning’ does help you get over defeats. But you only get better if you want to win at all costs.”
Regarding the course of the regatta, Christian Zuerrer says: “Actually, everything went optimally. The set-up, the preparations and the training went according to plan. And the races themselves went pretty well in retrospect. Being almost always in last place is of course below our expectations. But we often fought for second last place, which means that we rarely finished far behind. This gives us a good basis to start optimising right away. We can certainly use the fact that we didn’t start with our own boat, which is still in the shipyard, as an excuse. Although RC44 boats are standardised, it is an enormous advantage to be able to adjust to your own boat over a longer period of time. In addition, the available sails were not quite fresh, which probably didn’t help either. But all in all, we are satisfied, especially with the fact that as a reshaped and expanded team we are already playing together very well and can already benefit from each other. Accordingly motivated and ambitious, we are looking towards the 44Cup Marstand at the end of June, and even more so towards the 44Cup World Championships in Portroz, where we will hopefully finally get our own RC44 on the start line with Black Star II.”

To the GPS tracking records of TracTrac and the results: