On the afternoon of 30 June, the time had finally come: after an interruption of more than 18 months, the long-awaited starting signal was given for the GC32 Lagos Cup and thus for the first event of the GC32 Racing Tour 2021.

This moment has been a long time coming. Again and again we have hoped, often trembled that there would be a relaxation and thus the necessary easing. In the meantime, we used the time to keep fit, practise and get the boat in shape.

The anticipation and nervousness were correspondingly great. With the starting signal for the first race on Thursday, 13:00 local time, the patience finally came to an end.

Euphoria at the start

We crossed the start line for the first time after such a long time with a strange feeling of elation – it was almost like our first race two years ago.

This euphoria was immediately rewarded with a second place behind Alinghi.

But afterwards it quickly became clear that the other teams had not slept in the lockdowns either. The battle for places was on.

The fights for position demanded absolute top performance from all teams. The constant changes in the lead in the individual races showed how close the top is again this season. Unfortunately, we were not able to maintain the level from the start throughout all the races. Instead, an energy-sapping up-and-down began for us. Nevertheless, we were able to finish the first day on the podium.

A short debriefing in the evening reminded us of the most important points. Negative points were discussed and ticked off. In the team meeting the next morning, we looked at the previous day in detail and highlighted the positive moments.

Well prepared by the coach, we set off for the second day.

Almost over-motivated, we started the second day of racing and tried to forget the previous day. Unfortunately, we could not convert our ambitions into good results.

Then, in the seventh race, the big shock moment: Shortly after the start, the lower mast section suddenly broke away in full flight. When the construction broke with a loud bang, nobody on board immediately understood what was actually happening. Only when the mast and the sails fell into the water did we react.

The first action was to check that all the crew were unharmed. Lifeboats arrived. The broken mast was secured so that it could not damage the boat. Then we set about recovering the sails. Thanks to the immediate help from organisers, other teams and our entire crew, we were able to recover the sails without any significant damage, hoist the mast pieces on board and secure them to return to the marina. The crane operator was pre-navigated by phone and the boat was immediately ditched. On shore, the damage was surveyed and a plan was made of what needed to be replaced and how we would organise ourselves.

Thanks to the French team Zoulou, who provided us with a part of their replacement mast, and team Alinghi, who contributed replacement shrouds, a quick repair was even possible. In a joint night shift we achieved a small feat of strength, and the next morning the Black Star was ready to enter the water again and sail away.

Restart with a new mast

Exceptional situations like this are a source of team spirit and help us to pursue our goals more consistently as a team.

We started the first race on Saturday with the ambition to crown our “comeback” with a victory. Unfortunately, while we were in the lead, we caught a wind shift wrong and had to let the Danes and the French pass under the land. We then made up for the first Black Star Sailing Team race win at a GC32 Racing Tour regatta in the second race. But in the following races we were again not consistent enough in our manoeuvres and tactical decisions, so that we did not make it back to the podium on Saturday.

Therefore, Sunday was the last day of the regatta and it was all about the fight for a podium place. Alinghi was quite clearly in front, while everything was still open for places two to five. With only a few points separating us, the fight was hard for every centimetre. Despite a heat win in the last race, we had to settle for fourth place, just one point behind.

Of course, this ranking in the first regatta of our second season is a considerable improvement. But with the better performances, the demands and expectations also rise.

We take the positives out of it and console ourselves with the thought that we might have done better without the broken mast. At the same time, however, we are self-critical and look back at those regattas in which we were in the lead and continuously sailed backwards in the ranking.

We are looking forward to proving our form again in Lagos in two weeks’ time.

We say thank you

At this point a big thank you to the organisers of the GC32 Racing Tour and the GC32 Lagos Cup in Portugal for their work and helpfulness, to Team Zoulou and Team Alinghi for their generous help with spare material and of course to our own team for the performance, the cohesion and the extra effort.

We would like to say a special thank you to all our fans and to our families and friends who encouraged us with numerous messages and motivated us to persevere.

Last but not least, we would like to thank our partners and sponsors for their generous support.

Here you can find the results and the GPS records of the GC32 Lagos Cup No. 1: 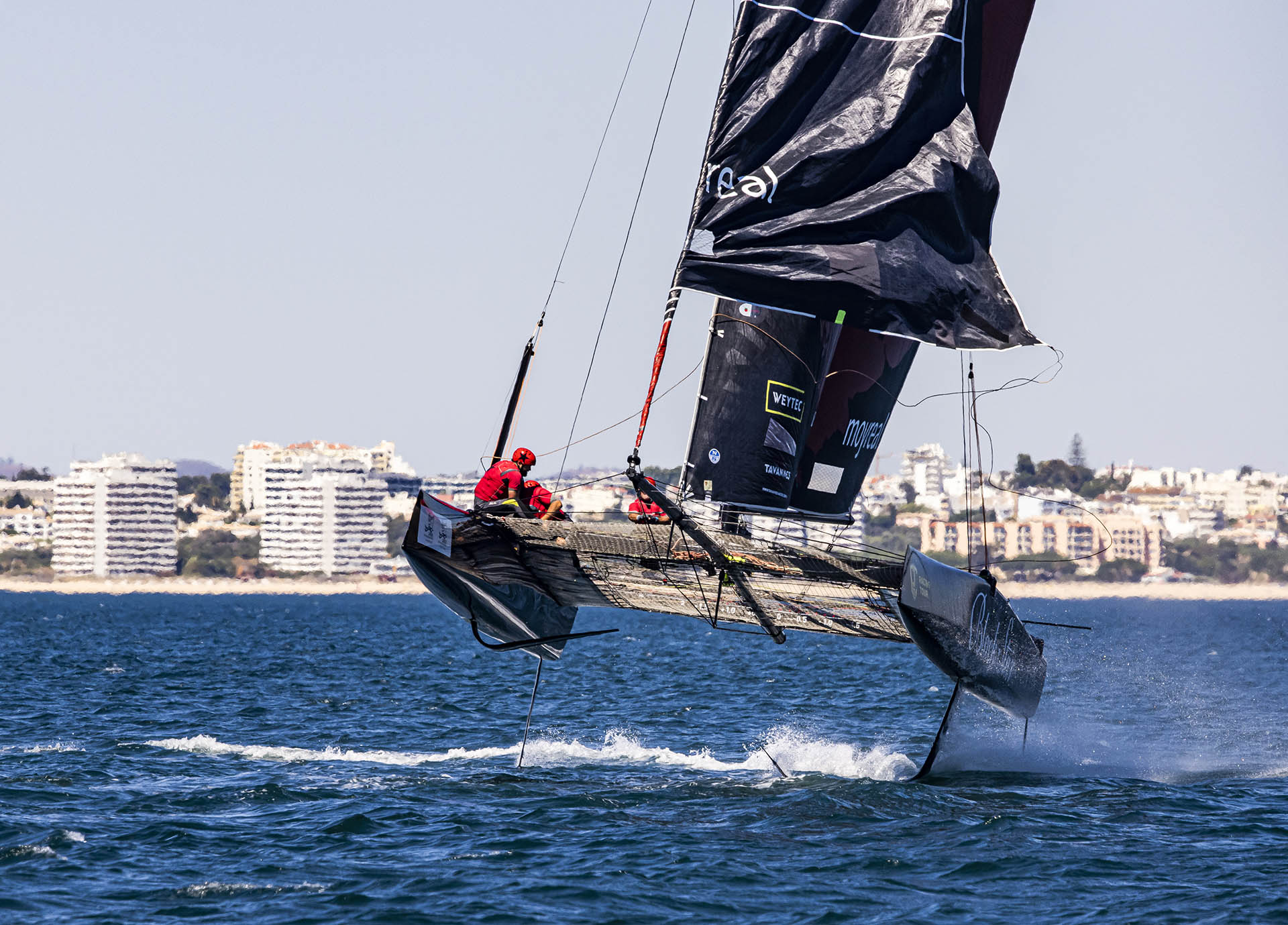 Sailing a foiling catamaran always pushes the limits. Not only for the crew members, but also for the material. 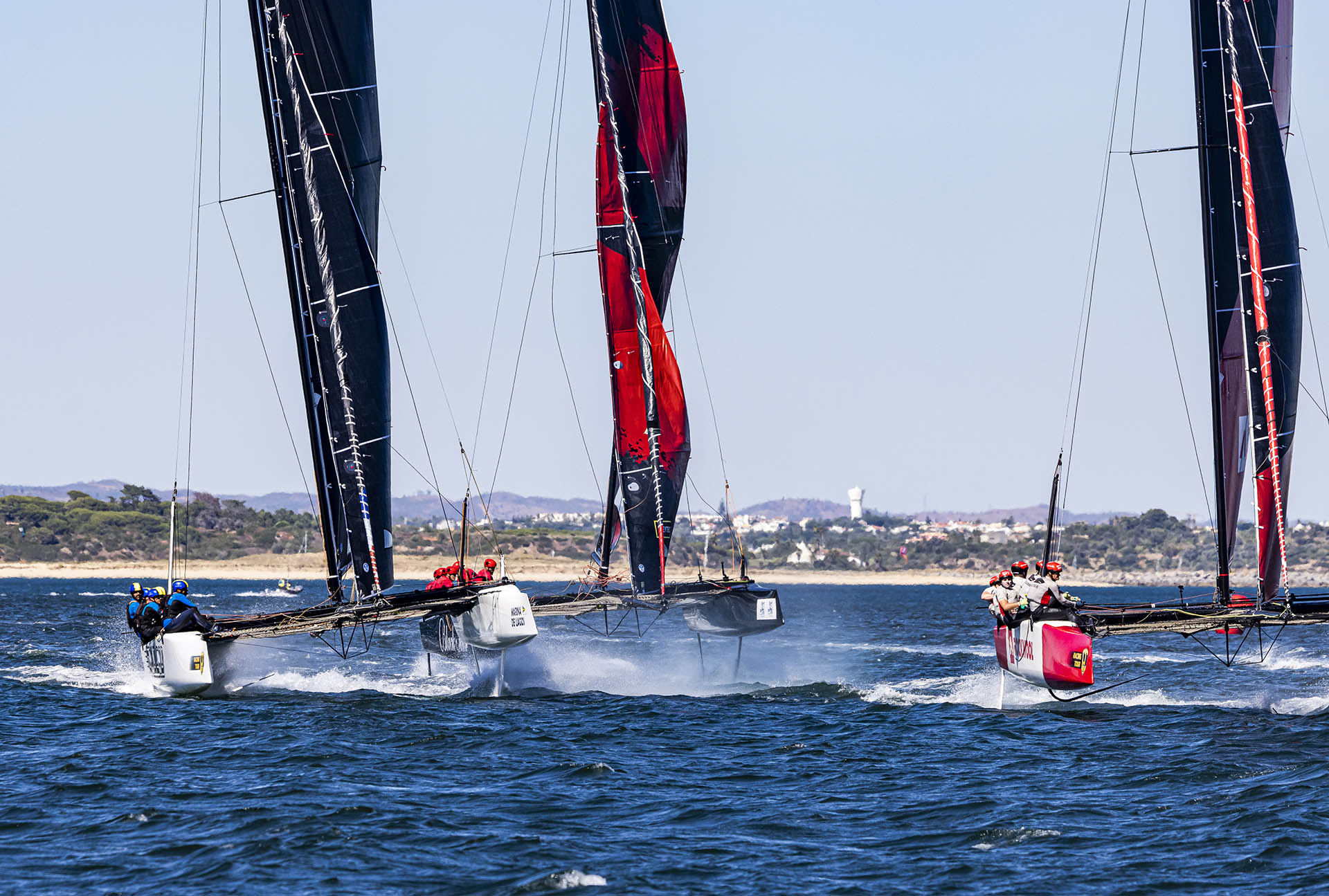 In race no. 7 on the second day, it was probably too much for our mast: with a loud bang, it burst in the lower section … 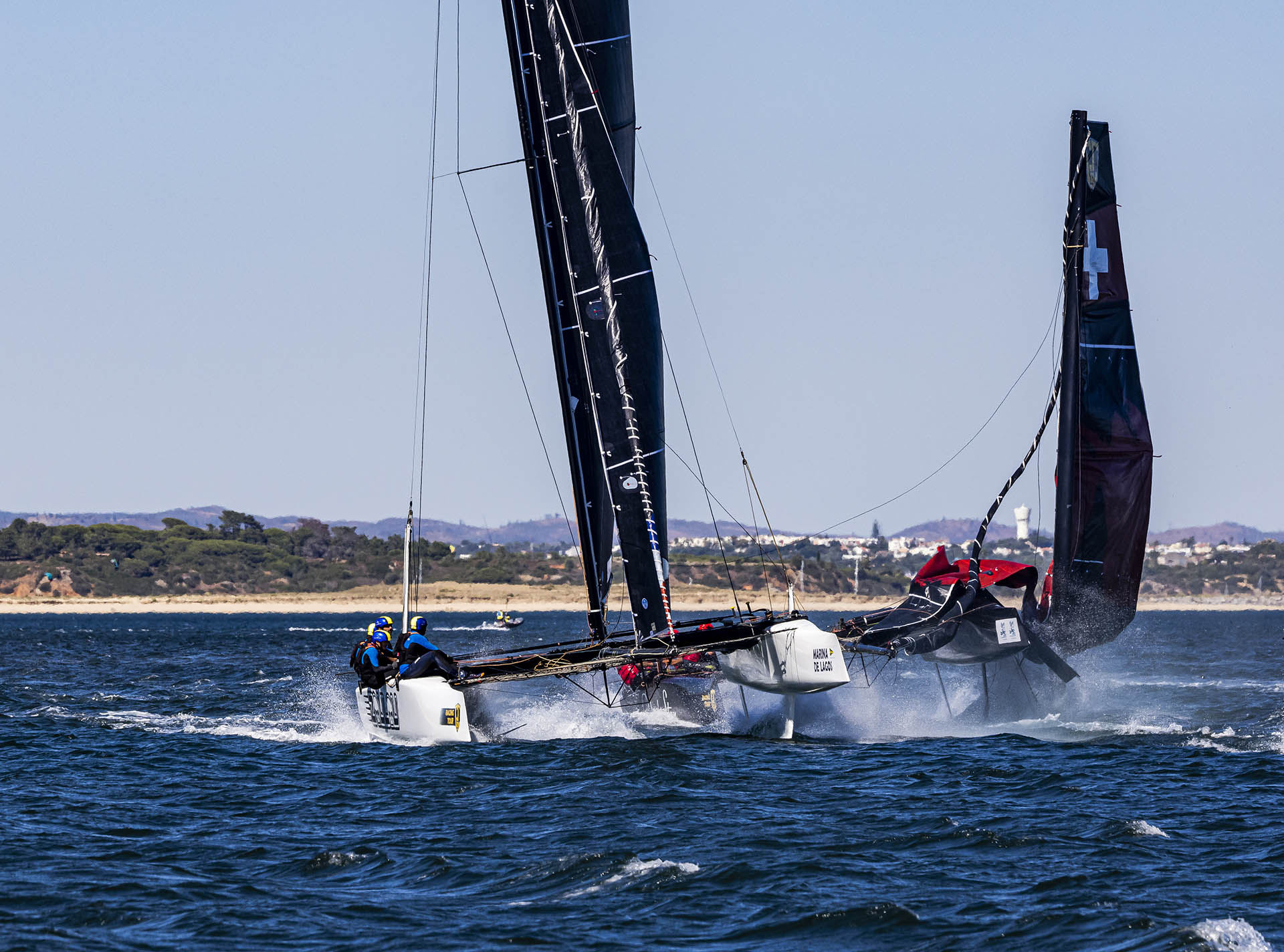 … and before we on board realised what exactly had happened … 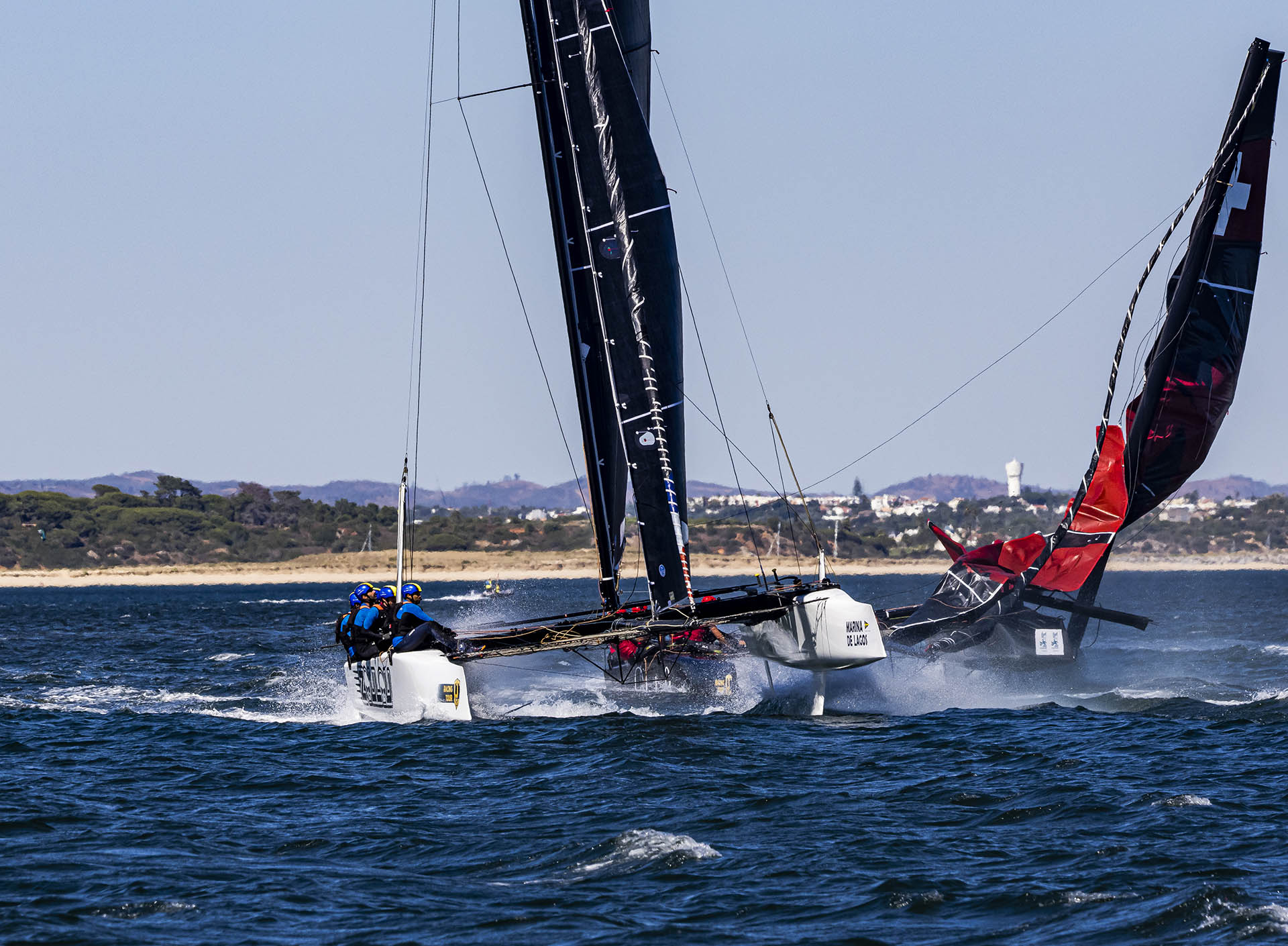 … we stopped and the mast and sail fell into the sea in front of us. 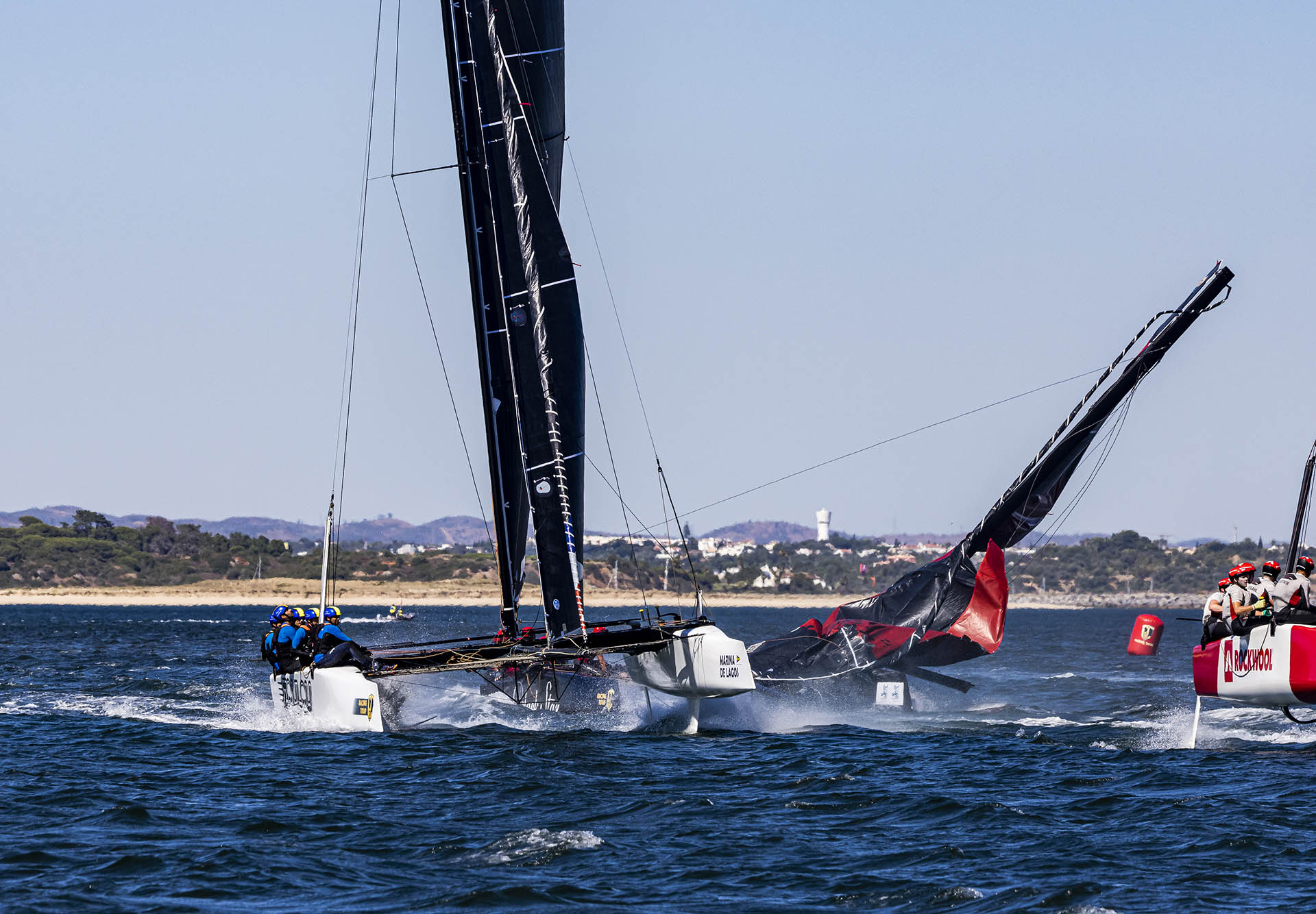 Fortunately, no one was injured and apart from the mast, the boat remained intact. 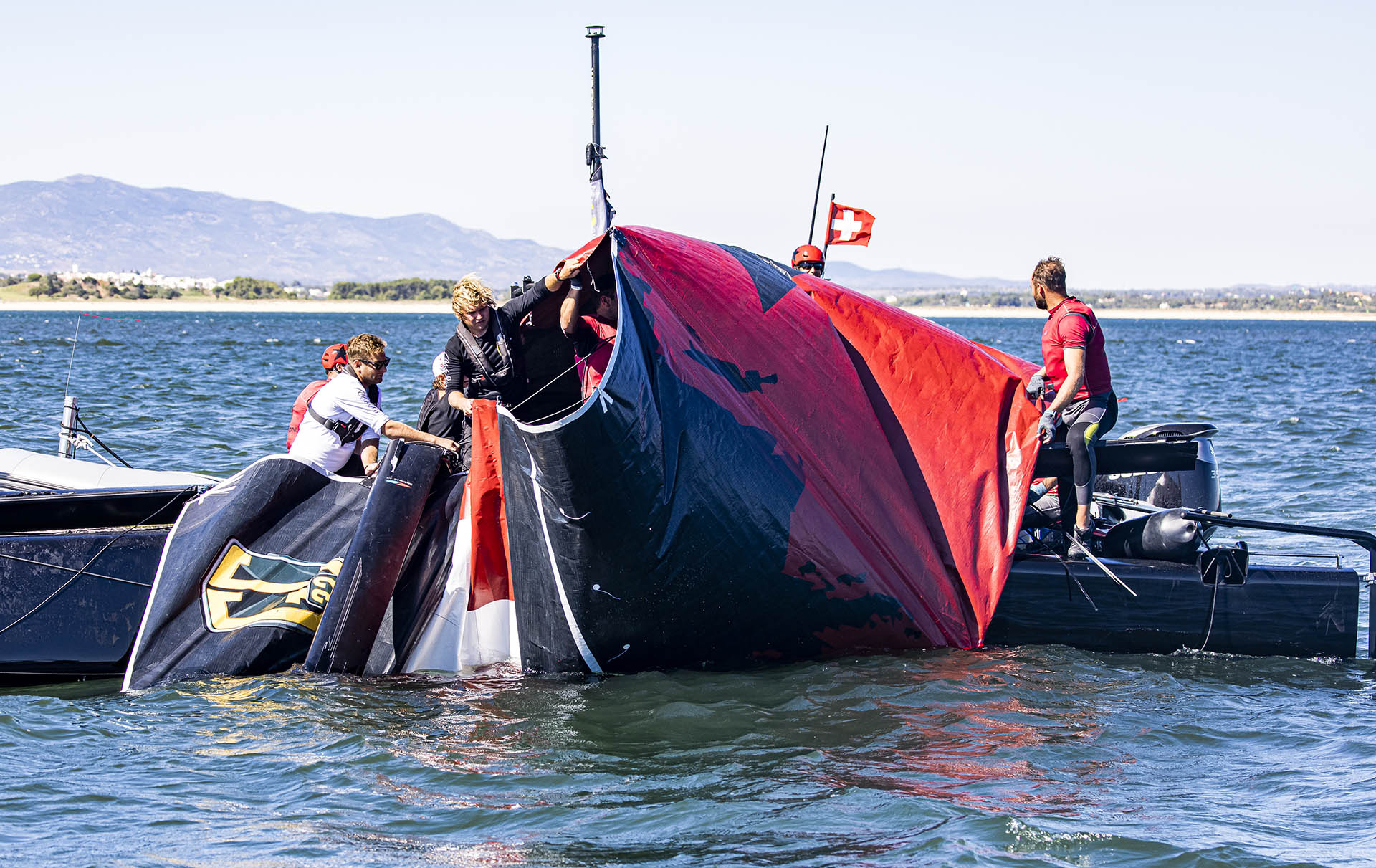 Thanks to quick help, we were also able to save the sail and thanks to the support of other teams … 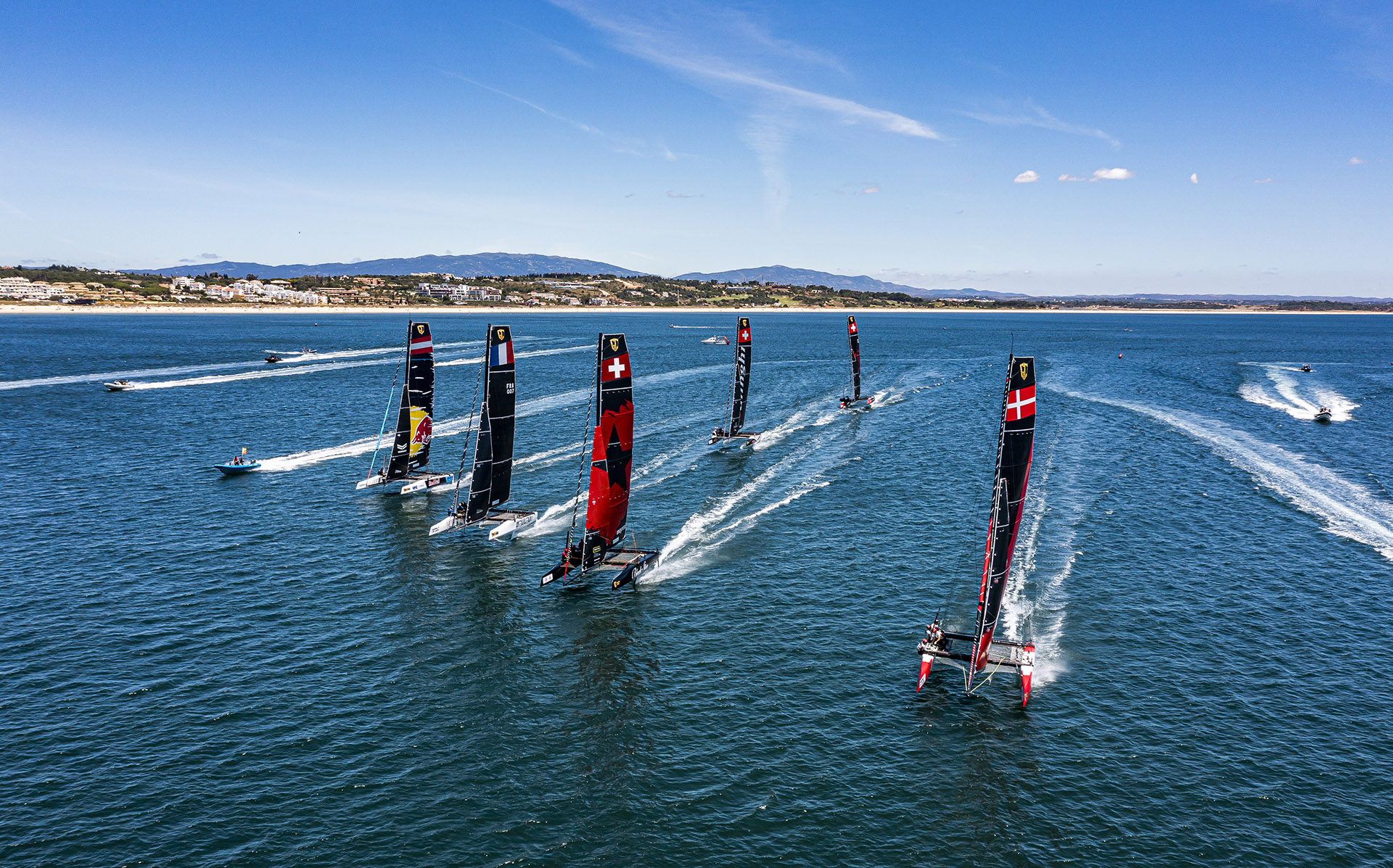 … we were ready to take off again the very next day.

More pictures of the first GC32 Lagos Cup 2021 can be found in our gallery.

to the Black Star Sailing galerie