GC32 Racing Tour Event 1: Satisfied, but not at the goal yet.

On Sunday 26 May the Villasimius Cup, the first regatta of the GC32 Racing Tour 2019, ended with the 16th and final race. Soaked by the heavy rain and the rather stormy sea, the ten teams took part in the award ceremony right after the race.

Black Star Sailing and six other teams unfortunately only played the role of the applauding audience. On the opening day still hoping to sail right in the middle, the team around skipper Christian Zuerrer and helm Flavio Marazzi was clearly put in the ranks in the course of the 16 races. Exhausted, a little disappointed but still satisfied, the Black Star Sailing Team started to congratulate the winners of the first stage.

But let\’s tell the story one by one.

A few days before the first starting signal Skipper and Team Principal Zuerrer arrived at the scene. He describes the events of the first regatta like this:

\”Villasimius! The long wait had come to an end. Finally we could compete with the world best of this boat class and the world best of sailing. At last we were able to show what we were capable of and at the same time find out where we stood.

Of course it was clear to us that we were competing against well-rehearsed teams, some of which have been sailing together for many years. Nevertheless, we didn\’t shy away from the comparison. In the training days before the first start we were able to see for a moment how we were doing in relation to Alinghi, Red Bull, Ineos and the other teams.

With the press conference the Villasimius Cup was officially opened. In a short interview I was able to explain to the press and the other teams why I founded the Black Star Sailing Team, why I sail this boat class and why we participate in the GC32 Racing Tour. Once again it became clear how much we took on the role of underdogs in this line up of world class teams. But that\’s a challenge we were happy to take on.

According to the weather forecasts we were pleased with the warm weather – even if the wind conditions did not seem to be optimal.

But the start into the first race was very difficult for us. Maybe a little overmotivated and nervous we didn\’t manage to bring enough peace into the boat and to find the right trim. Then, turning and changeable winds made it even more difficult. The rather difficult conditions then also caused an interruption of the regatta series, so that only one race could be driven on the first day.

On the second race day we continued with summer temperatures. Fortunately the wind was a bit stronger and more constant. We were highly motivated and sailed into fifth place in the first race. Unfortunately, we lost our momentum and were ranked further back with every race. Somewhat frustrated that we never really reached the optimal speed on the second race day, we returned to the harbour in the evening.

Thanks to bad weather in the upwind

According to weather forecasts, we were facing a change in the weather for the weekend with a drop in temperature. The morning of the third race day welcomed us with a cloudy sky. The rain pelt down on the roof of our accommodation. The wind had refreshed strongly. So after the sunny and warm days we had to wear warm clothes.

The setting at the sail mast was adjusted to the stronger winds. Best prepared for the changed conditions we could start.

Looking back it can be said that we coped better with the fierce weather. The rather stormy winds and the rough sea demanded everything from us. But probably it was exactly what each of us needed to get into the team.

Of course we can\’t be satisfied with the final result in itself. But at the same time we can look back on a week in which we managed to never be far behind as the last to cross the finish lines. At the Villasimius Cup we clearly improved and grew even closer together as a team. We\’ll take that with us to Lagos Portugal, where the World Championship will take place at the end of June.\”

The Black Star Sailing Team congratulates Team Oman Air for the victory at the first event of the GC32 Racing Tour 2019. We would also like to thank the organizers, who made the best out of the not always easy conditions to have fair competitions.

Details of the Villasimius Cup with even more pictures 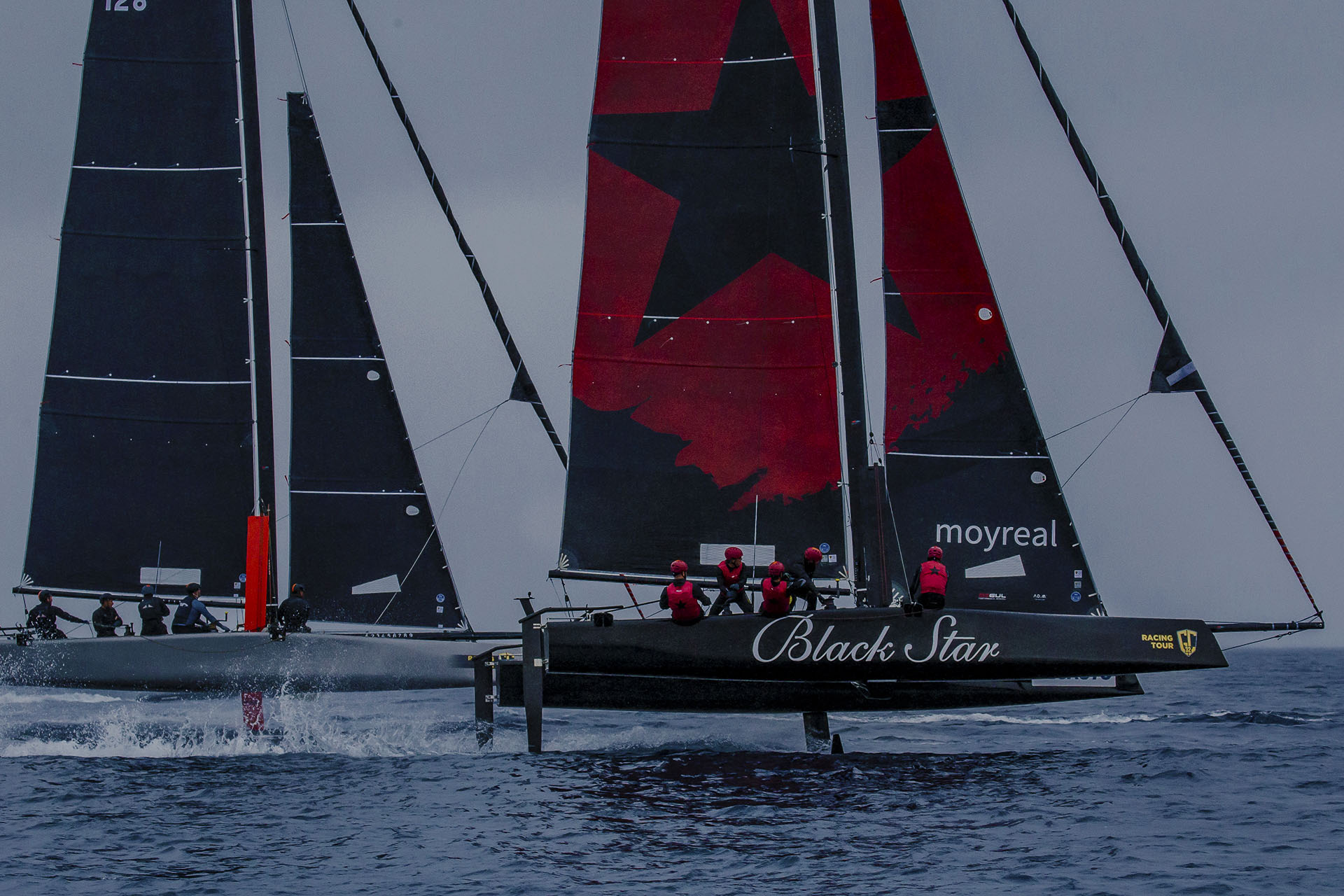 Take off in stormy winds: The Villasimius Cup race days 3 and 4

Last. But not least: The Black Star Sailing Team after the first fire test.