Having travelled from the cooler north back to the hot south, we had a few days of rest before the big GC32 class event.

On the journey and during the RC44 event in Marstrand we had taken the time to analyse, discuss and process the disappointing GC32 regatta in Lagos. Together we determined the cause for the sobering result and were then able to travel back to the Algarve for the World Championships with a positive attitude.

After the first training manoeuvres on Saturday, we held a team meeting with the entire Black Star Sailing Team in the evening. This meant that the people from the shore team were also present, who support us constantly throughout the year with the boats, all the work around them and the organisation of food, drinks, materials etc. The contribution of the shore team is essential for success, even if it is “only” indirectly related to sailing. Therefore, the presence of the complete Black Star Sailing Team was all the more important, because we had big plans: Together we wanted to define and internalise our goals and ideas for the World Championship. With “One Team one Dream” we initiated a motto that we wanted to successfully carry from our get-together into the upcoming training days and also into the World Championship.

No training, no chance?

The wind conditions at the beginning of the week were atypical for Lagos. Unusually hot temperatures prevented the seabreeze from kicking in immediately in the morning as usual, and instead only light winds blew from different directions. The delayed arrival of the wind from the sea also resulted in enormously high swells. At times up to four metres high, this made it impossible to go out with the catamaran. Even the attempt with the dinghy was impressive, one had to steer concentrated and straight in direction to avoid being caught sideways by a wave and capsizing.

So the scheduled training sessions could not be realised as planned. Instead, we explored the coast with our Zodiac, went swimming in the waves or tried our hand at surfboarding.

Wake-up call to the will to win

Just in time for the start of the actual World Championships, the sea calmed down and we started well and, above all, quite consistently into the first day, despite a lack of training.

On the second day, we continued our good performance from the previous day with a third place, before we suddenly suffered a setback again with an eighth place. Somehow you could really feel the frustration on board. Even our coach avoided analysing the race, which was not a good sign. He and everyone on board knew that we could definitely do better. Only with an encouraging and perhaps a little snarky “come on boys” did the coach cast off again with the dinghy and we made for the start for another race.

As if this low point had been a final wake-up call, we won the last two races on Friday. We went from third to second behind the French team and ahead of Alinghi.

With consistent performances on the third day, we consolidated second place and shortened the points gap to the leading team before the grand final on Sunday. 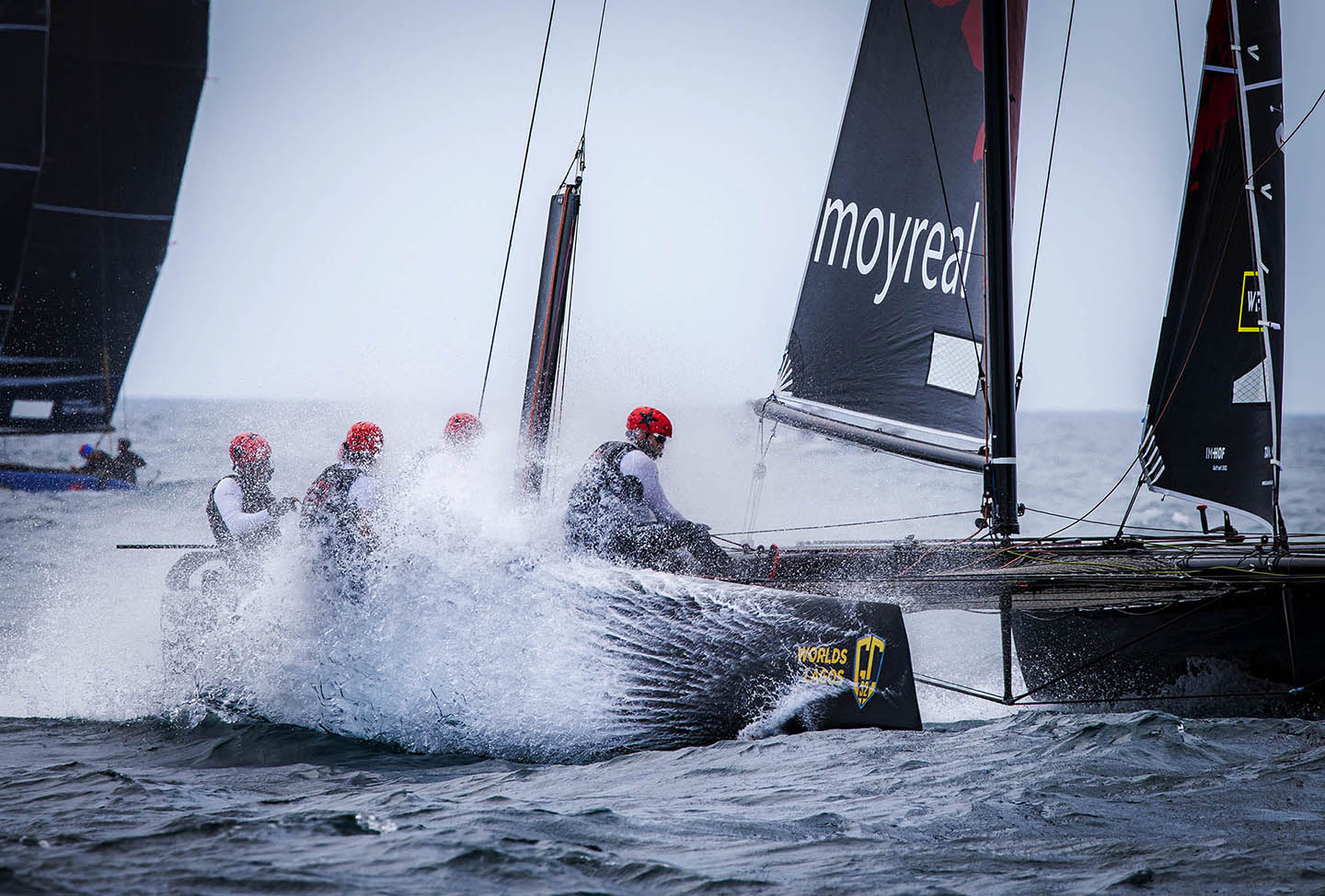 After a promising first day, we first had to be reminded somewhat rudely of our will to win in order to really take our chance at the title.

At a GC32 regatta, a maximum of five races are sailed per day. Points are awarded per race depending on rank. With a line-up of ten boats, these five races each count for 50 points if you lose in all of them. The team with the fewest points at the very end wins.

The fourth and final day of racing was pure excitement. Highly motivated and focused, we started with a second place in the first race. As the leading team from France finished sixth, we were able to reduce our points gap again.

In the second race, the French won ahead of us. So they were not beaten yet. But everything was still possible for us.

We won the hard-fought third race with a first place, while the French finished seventh. It was close to the end of the World Championships, and Black Star Sailing Team was in the lead!

There were still two races to go and anything was still possible.

In an interview the night before, we were also asked about our tactics. We reiterated that we were focusing on ourselves and not looking at other teams. In sailing, it is a tradition that you always sail against your direct competitor, even in the field, and “cover” him. It happens quite often that another team benefits from this and passes by as the “laughing third” with even better results.

Focused on ourselves, we started the next race. The wind had died down in the meantime and we tried to choose courses where strong winds were still to be expected. The tension in the team was enormous and yet we were calm and concentrated on board. The leading positions changed several times. We narrowly won this race – and then we waited for the French to cross the finish line. When it was clear that they had crossed the finish line in ninth place and a quick calculation resulted in an 11-point lead, we realised what we had achieved. The arrival of the media boats, the congratulations of the other teams then definitely confirmed: WE ARE WORLD CHAMPIONS!

In the meantime, a few weeks have passed. Maybe it’s because regatta sport is barely in the focus of the media in Switzerland, maybe it’s also because our small nation has been honoured with plenty of world championship titles, but outside the sailing world our success didn’t get too much attention. But that doesn’t change the fact that the Black Star Sailing Team was able to prevail in one of the fastest racing boat classes and thus secure a special place in the universe of sailing.

Somehow we still can’t quite believe it, but that will come eventually.

We are infinitely grateful. For the title, for what we have achieved and therefore for the abundant support and continued patronage from everyone who believes in us.

Currently, we are enjoying the fading summer. But even in this non-competitive time, the planning continues unabated. The new RC44 yacht is being completed and plans have to be made as to when we will sail it for the first time. The container is also being finished and packed so that everything can be transported to Slovenia for the RC44 World Championships in October. With the GC32 catamaran we will continue in October. Unfortunately, the event in Sardinia had to be cancelled, which gives us some breathing space.

Visit our GC32 gallery where you can find many spectacular photos from the World Championship: