Another training session was planned for Easter. This time our destination was Villasimius, the place where the first GC32 Racing Tour event will take place. Full of expectations we set off. With Alinghi, Red Bull and Zoulou, three teams were already training on site.

Immediately after our arrival we unloaded the hulls to do some repair work. Little by little the rest of the team arrived, so that we made good progress with the assembling.

Situated at the southernmost end of Sardinia, Villasimius is picturesquely nestled between hills. Long, white sandy beaches, the sea with crystal clear water and blue bays for which Sardinia is best known, attracts countless tourists during the holiday season.

Welcomed by sunny weather, we hoped the first two days that the bad weather forecasts might not come true. Especially the announced wind speeds of over 30 knots (more than 55 Km/h) had us worried. A racing catamaran of the GC32 class can be sailed up to 25 knots wind speed, provided that the water remains shallow. These conditions in Villasimius are predetermined by the wind direction. So we continued the assembling work in cheerful spirits. 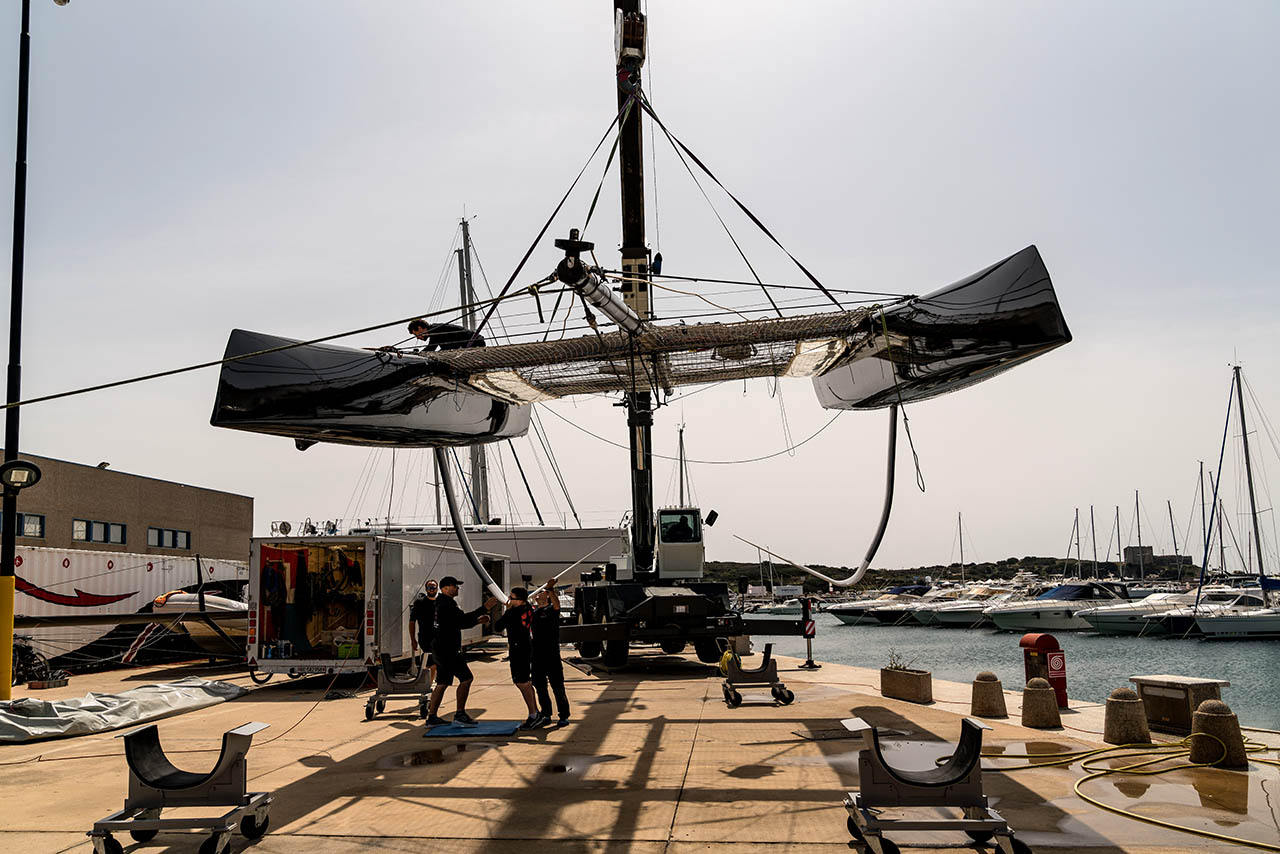 The sun is deceiving: due to bad wind conditions Black Star was taken out of the water earlier

As planned, we launched the boat on the morning of Maundy Thursday, with the aim of starting the trainings in the afternoon. However, much to our disappointment, the wind gained in strength and developed into strong, unstable gusty winds. A little reluctantly we decided, instead of training on the water, to do further optimization work on the boat and hope for better conditions.

On Good Friday the weather was even worse. The sky was overcast, there were still strong gusts and overnight the temperatures had dropped even further. Due to the bad weather conditions for the upcoming Easter weekend we decided to take the boat out of the water again. Since sailing a foiling catamaran with stormy winds holds a quite a high risk, we preferred to use the time to get the equipment ready, which would leave us with only the Racesestting before the actual competition. The whole team worked flat out on the preparations, so that we could fly home on Saturday. 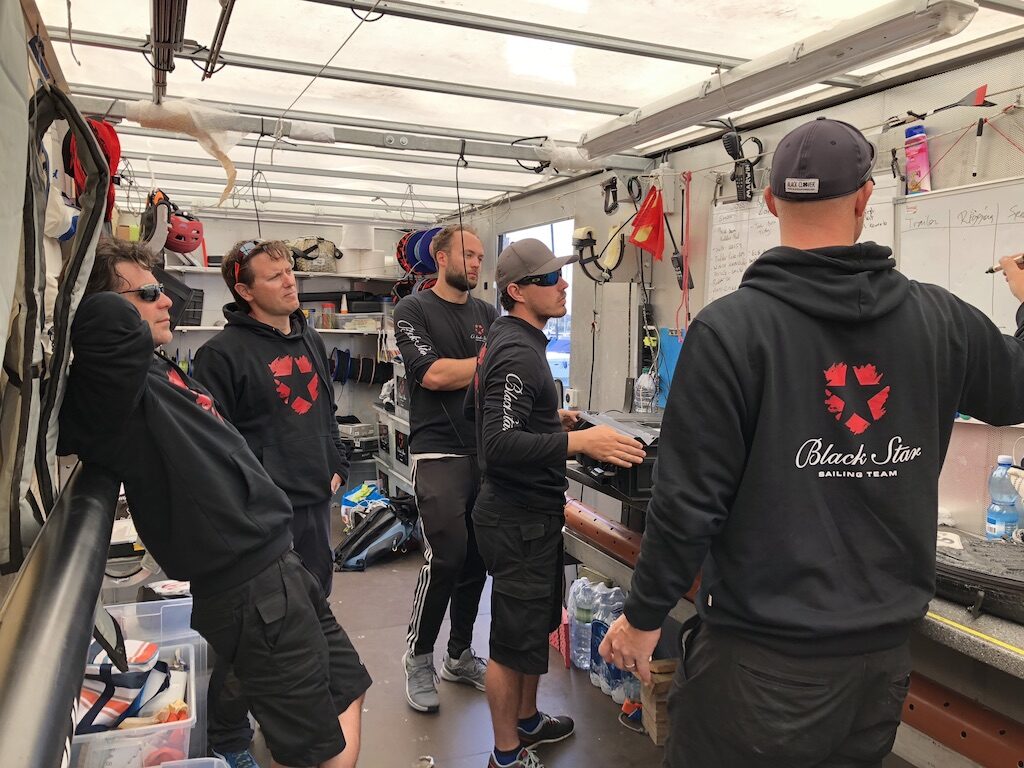 Discussion and distribution of tasks – everyone takes over where they can

This is also a facet of regatta sailing

Unfortunately, we were not able to carry out the training days as planned. Nevertheless it was not wasted time. The weather conditions unexpectedly provided the perfect moment to practice exactly what makes teams winning teams: togetherness.

And now we will simply return to Villasimius for the first event a little earlier than planned. The weather god will certainly be more gracious to us so that we can train on the water for a few days before the starting signal for the first regatta. 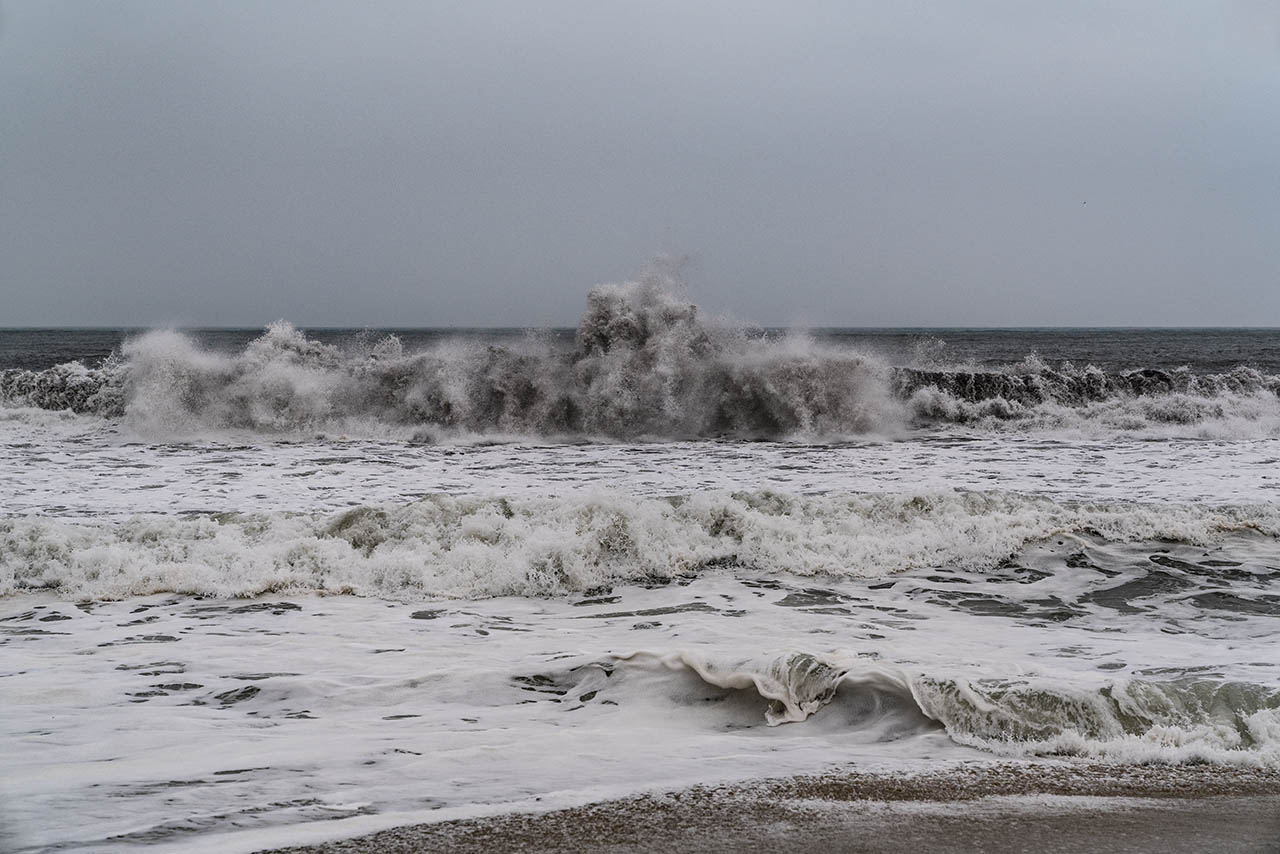 Looking back it can be said that we experienced an intensive time in Villasimius despite missing training on the water. The material and tools in the trailer and accompanying boat were reestablished, the safety equipment was replaced and the electronics were checked. On the boat various ropes were checked and adapted, the foils and rudder blades were ground and repaired. The boat is now ready for the first regatta!

After these three training sessions we are confidently looking forward to the first event and thank you all for your interest and support. 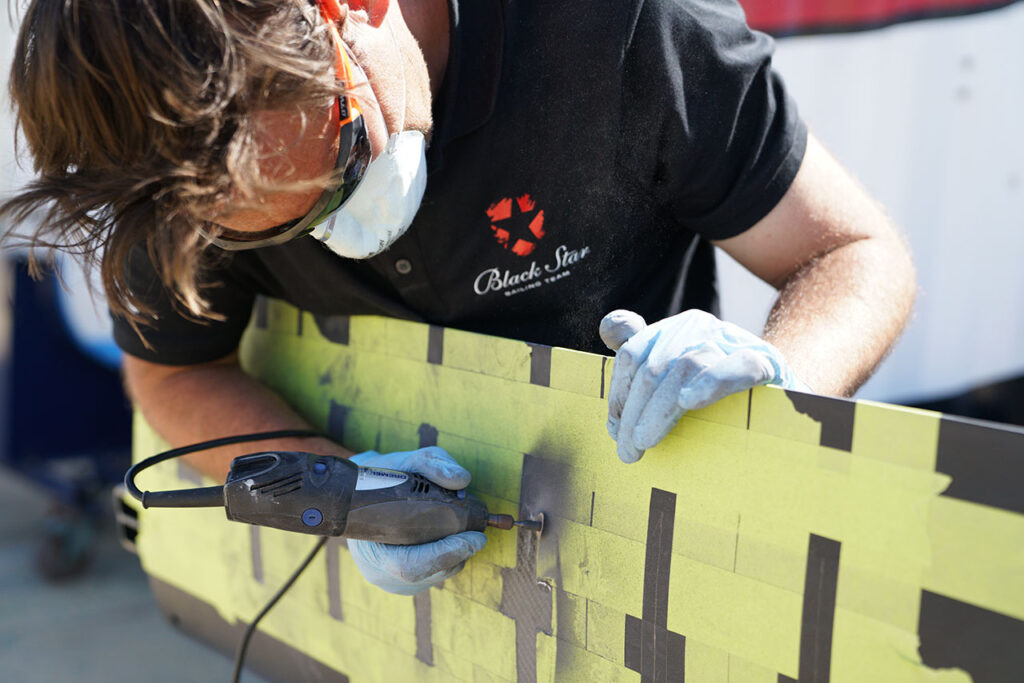 Boat hull, foils and oars made of carbon – there is always something to be repaired 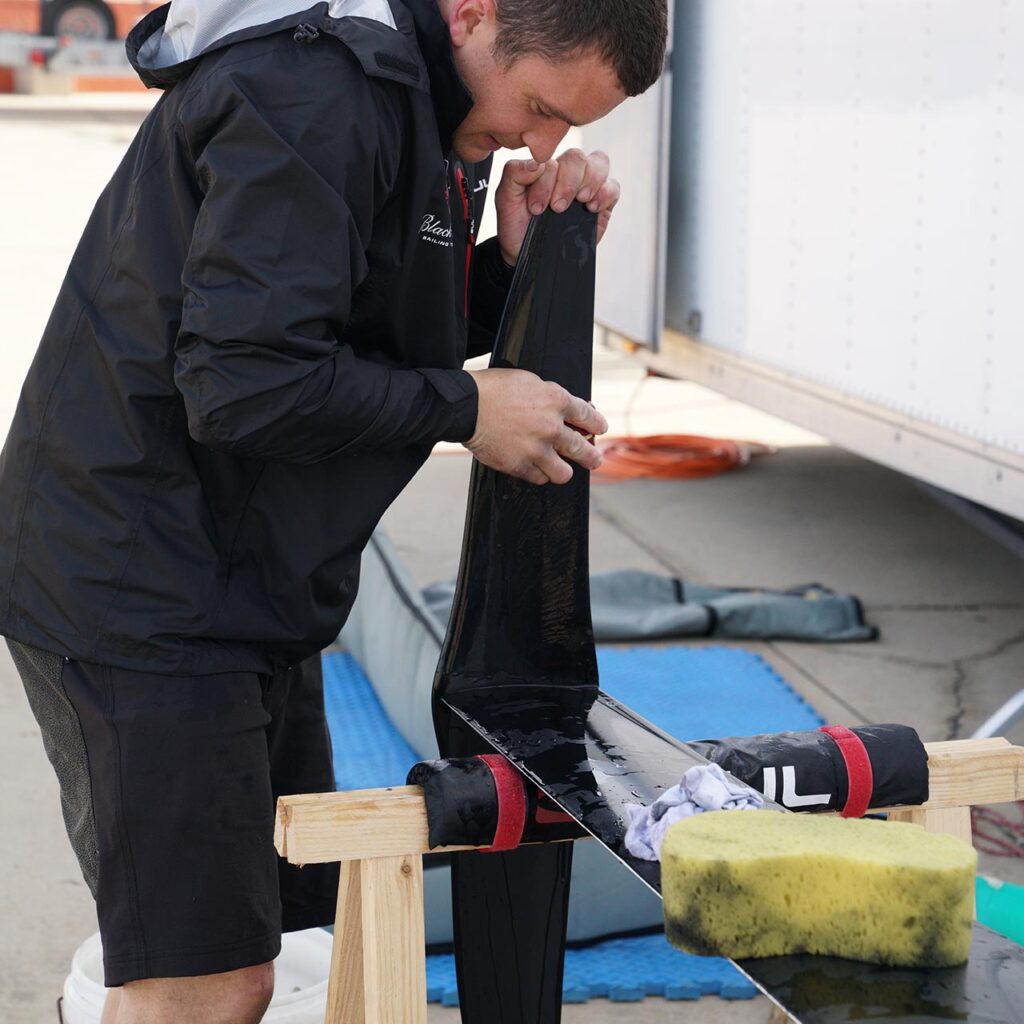 Rudders and foils have to be perfect – everybody lends a hand 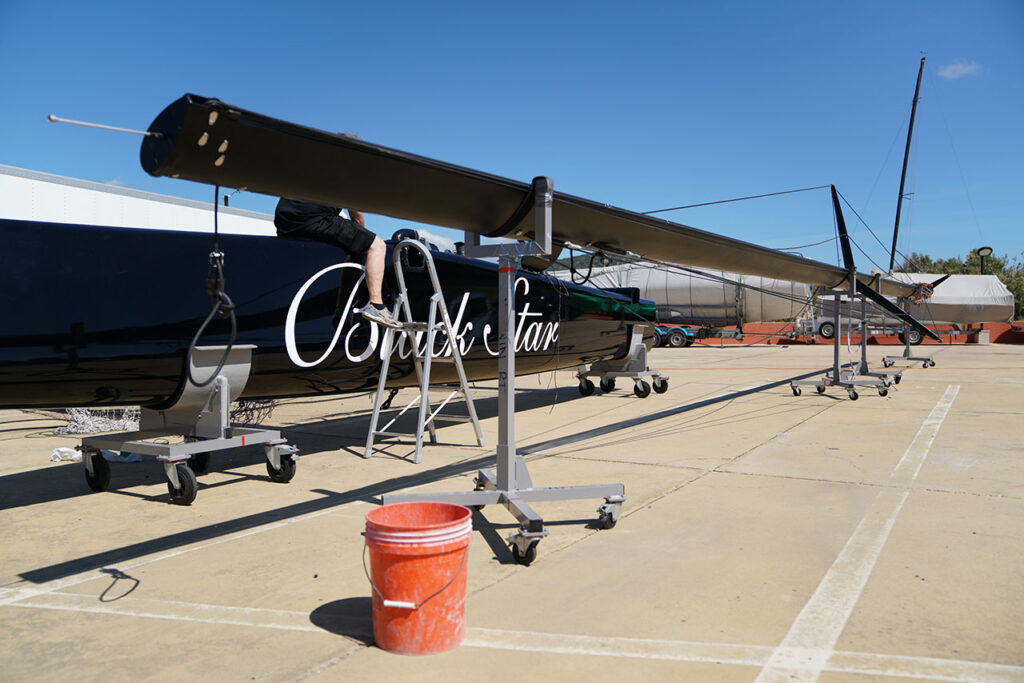 Set up in the blazing sun – who would have thought that we would stop early? 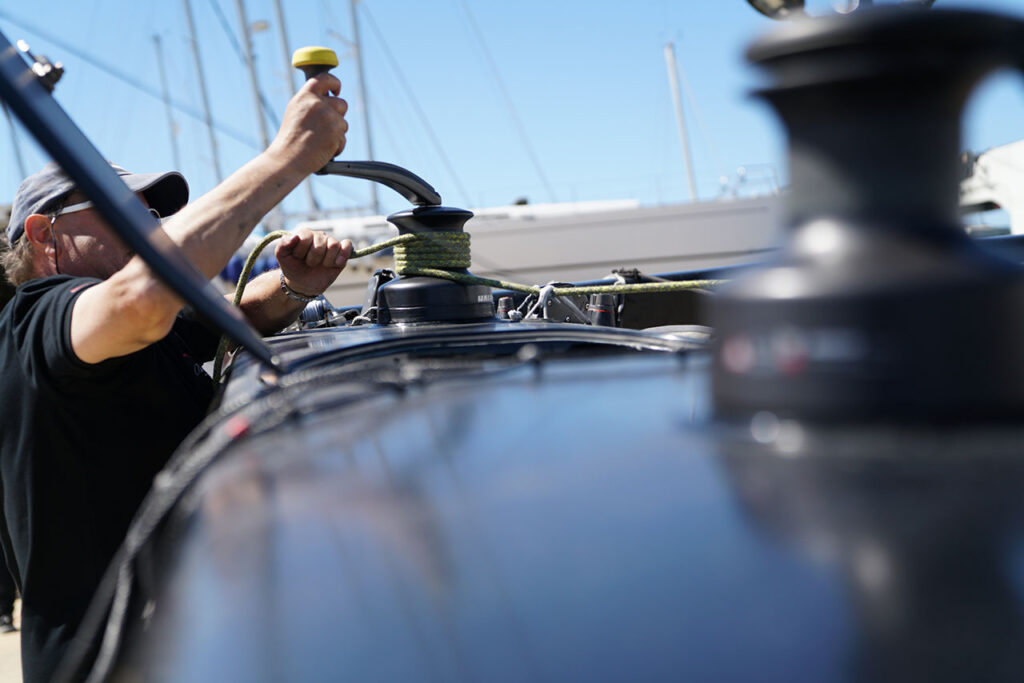 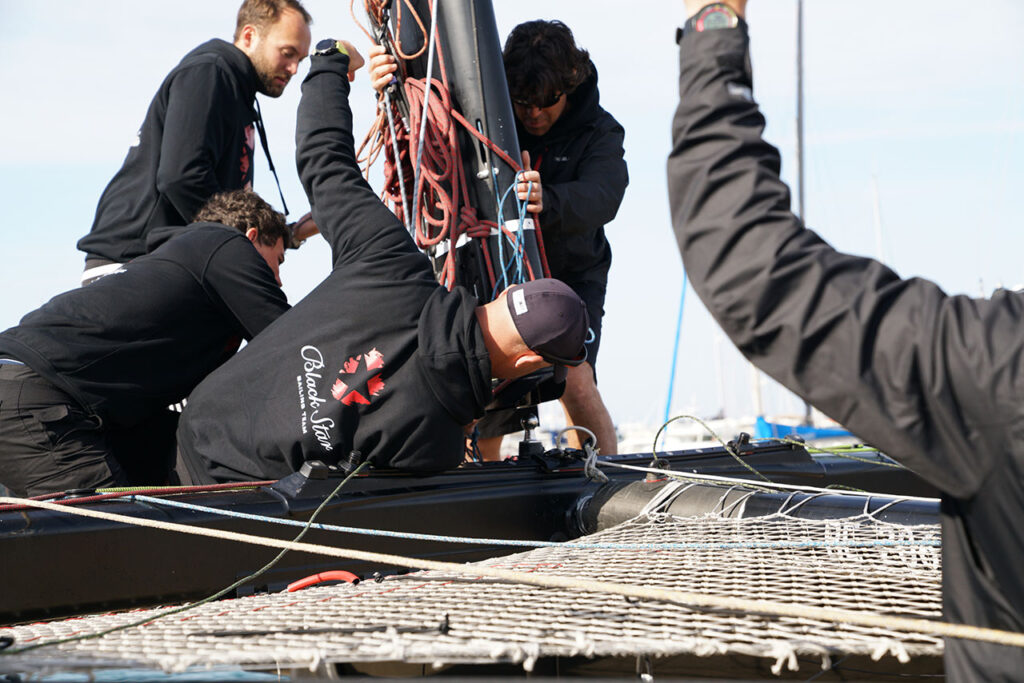