After sailing the final event of 2019 in Muscat as part of the GC32 Racing Tour, skipper Christian Zuerrer’s team also trained in Oman in February 2020 to prepare optimally for the upcoming season. After the cancellation of the GC32 opening event in 2020 due to pandemic, the team was now looking forward to travel back to the Orient.

Here is the regatta report from skipper Christian Zuerrer:

“In some ways it was strange to return to Muscat with an RC44 yacht after saying goodbye with the GC32 catamaran. But the many familiar faces that greeted us joyfully and welcomed us made us quickly forget the abrupt farewell at the beginning of 2020. Within a very short time, we had become accustomed to the localities again and started our preparations for the competition in good spirits. However, the warm temperatures made us a bit uncomfortable …

Back with good memories

As with most of our regattas, we had planned two days of training in Muscat to work on our maneuvers and boat handling. Unfortunately, we had to do without Simon at the last moment, who could not arrive due to a family matter. Obviously, we tried to solve the gap within our team: Gregoire agreed to take over Simon’s position, for which he was still well instructed by Simon and equipped with tips and tricks. For Gregoire’s now open position as offside trimmer, I decided at short notice to bring a woman into the team with Christa. The RC44 class intends to promote women in the coming season anyway, which is clearly in line with the objectives of the Black Star Sailing Team. Ergo, with Christa we offered a sailor whom we already had listed in our promotion lineup. Christa traveled from St. Moritz to Muscat within 24 hours and probably had the biggest temperature shock of all of us. Nevertheless, she integrated perfectly into the team in a short time.

Before the first competition started, we were asked to participate in a beach cleaning event.

The organizer, Oman Sail, offers young people in Oman not only free training in sailing, but also teaches them how to respect nature and protect the sea and beaches. This is also in line with our objectives: the Black Star Sailing Team has been trying to behave as sustainably as possible since the beginning of our campaign. In addition to the consistent disposal of waste, the cleaning of our working environment and marinas, and the targeted reduction of plastic waste, we cover our needs for drinking water by use of a filter device from locally available tap water. This way we avoid the use of about 3000 plastic bottles every season. 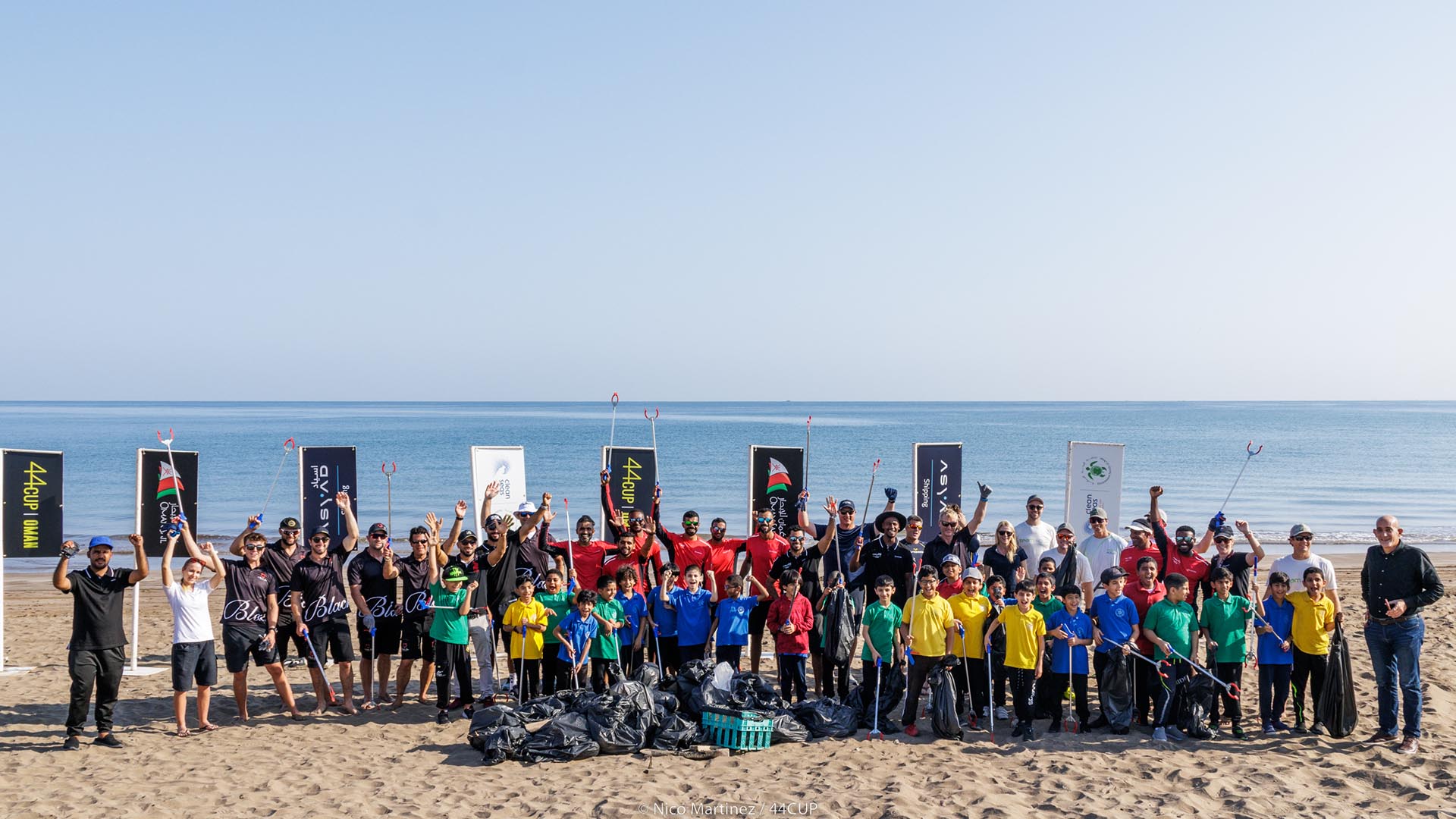 So with the teams Artemis, Aqua and Oman Sail we set out to clean a part of a beach together with young people. Once again a frightening experience that made us think a lot: What all comes to light in the sand, washed up by the waves …

On the opening day, the conditions were more or less the same as those we had at the World Championships in Slovenia: light winds and, at 25 to 30 degrees, more bearable temperatures. Due to the change in the crew, these conditions suited us very well, as the physical work on board is more strenuous in stronger winds and small mistakes are “punished” more severely. We started promisingly with placements in the midfield. Nevertheless, our performance, which was still not consistent enough, prevented us from getting even closer to the top. During the four days of racing, the conditions changed several times and the sometimes stronger winds confronted us with a different challenge, in addition to the position changes on board: Thus, we encountered new conditions with our new racing yacht during the ongoing regatta, which we could not yet adapt to the boat handling and trim. Accordingly, we repeatedly lost positions, but all in all we were able to make a big step forward and finished the regatta on the 6th place of 9 teams. The upward trend has been confirmed.”

In our RC44 photo gallery you can find new pictures which give a good insight into the events in Muscat.

And as always you can find the detailed results on the official website of the 44Cup.

to the RC44 gallery