After a stormy, cold start to the season in Villasimius, the GC32 Racing Tour 2019 was concluded in Muscat, the capital of Oman, in the week of 6 November with a dignified and brilliant finish.

“Never before have I sweated so much while sailing,” team boss Christian Zuerrer sums up the races in the Gulf of Oman. With this he sums up the challenges of the teams at this racing event: At 35 degrees and more, the fifth and last regatta in the bay off Muscat was fought for every centimetre.

But let’s describe the events of Oman in more detail with the words of Christian Zuerrer:
“For the first time the host of a regatta was so far away that we could not drive there with our trailer. Instead, the Black Star was loaded into a deep-sea container and went on a big journey. After a good two weeks our boat arrived safely in Muscat in the Al Mouj Marina.

When the team arrived a few days later, we were literally welcomed warmly. So the hosts of Oman Sail left nothing to be desired. Hardly anything was left to chance and almost everything was thought of. Above all, the weather conditions were very different to the late autumn in Europe.

The temperature difference from Europe to the Arabian Peninsula was enormous. Nevertheless the assembliy went well and we were able to keep to the schedule.
With Chris Steele at the helm and Nathalie Brugger as coach we were able to warmly welcome two new team members.
Nothing stood in the way of our goal to make a first step for the new season 2020 next to a good season end.

Start of training with gentle winds

As planned, we were able to launched the boats in to the water, have taken over the rental motorboat and start the water training on time. The first goal of the day was to find us as a team so that the coordination could be further optimized. Above all Chris had to develop the feeling for steering the boat. At the same time we adapted our jibe manoeuvres to become faster and more efficient compared to the other teams. Satisfied we could carry out the debriefing in the evening.

The second training day awaited us with more wind and some waves, so that we could check our settings further.
All teams raced against each others in small trainings regattas. For us it was helpful to be able to compare speed and manoeuvre in almost competitive conditions.

Highnoon in the Gulf of Oman

With two places on the podium we started promisingly into this last event of the GC32 Racing Tour. We were able to build on our good training results and showed the other teams that we can be reckoned with. As expected, however, the level of the other teams had risen again and the distances were tighter than ever. So nothing was given to us.
As expected there was a showdown between the title candidates. The Oman Cup and the GC32 Racing Tour remained exciting until the last race.
Unfortunately, Team Argo suffered damage to the Spine, so they had to end the race prematurely on day two. No team could help with a spare part – a repair was not possible in this short time.

The last event of the GC32 Racing Tour 2019 came to a dignified end with the award ceremony at the Al Mouj Marina in front of a large audience.

The whole event was excellently organized. The race committee together with the local club Oman Sail as organizer made sure once more that the competition took place under fair conditions for all and that the sport could stand in the foreground.

With Team Alinghi, a worthy winner was crowned who sailed the most consistently throughout the season. The Black Star Sailing Team congratulates the winners for their remarkable performance.

In the whole season, out of 100 planned races, only 10 could not be carried out due to weather conditions – too little wind, too much wind, too high waves. This is an encouraging result.

We were able to improve continuously over the course of the season and make progress despite repeated changes in the team. We missed our goal, the 5th place in the annual ranking, by 2 points. Nevertheless, we are satisfied with our performance and knowledge of what can be improved during the winter break.

Our boat stays in Oman, is parked in a container somewhere in the desert under one roof and is waiting for us to start training next year before the GC32 Racing Tour 2020 starts again in Muscat.”

Details of the GC32 Oman Cup with even more pictures 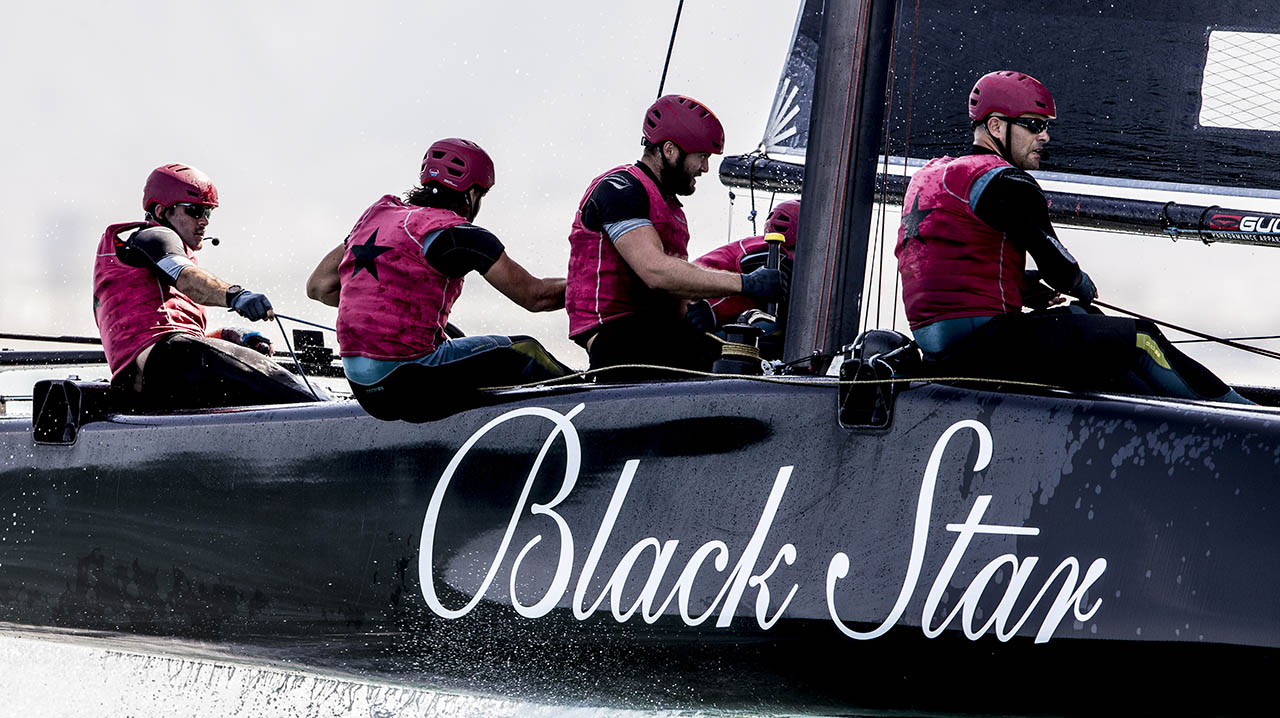 Black Star Sailing in the Gulf of Oman. 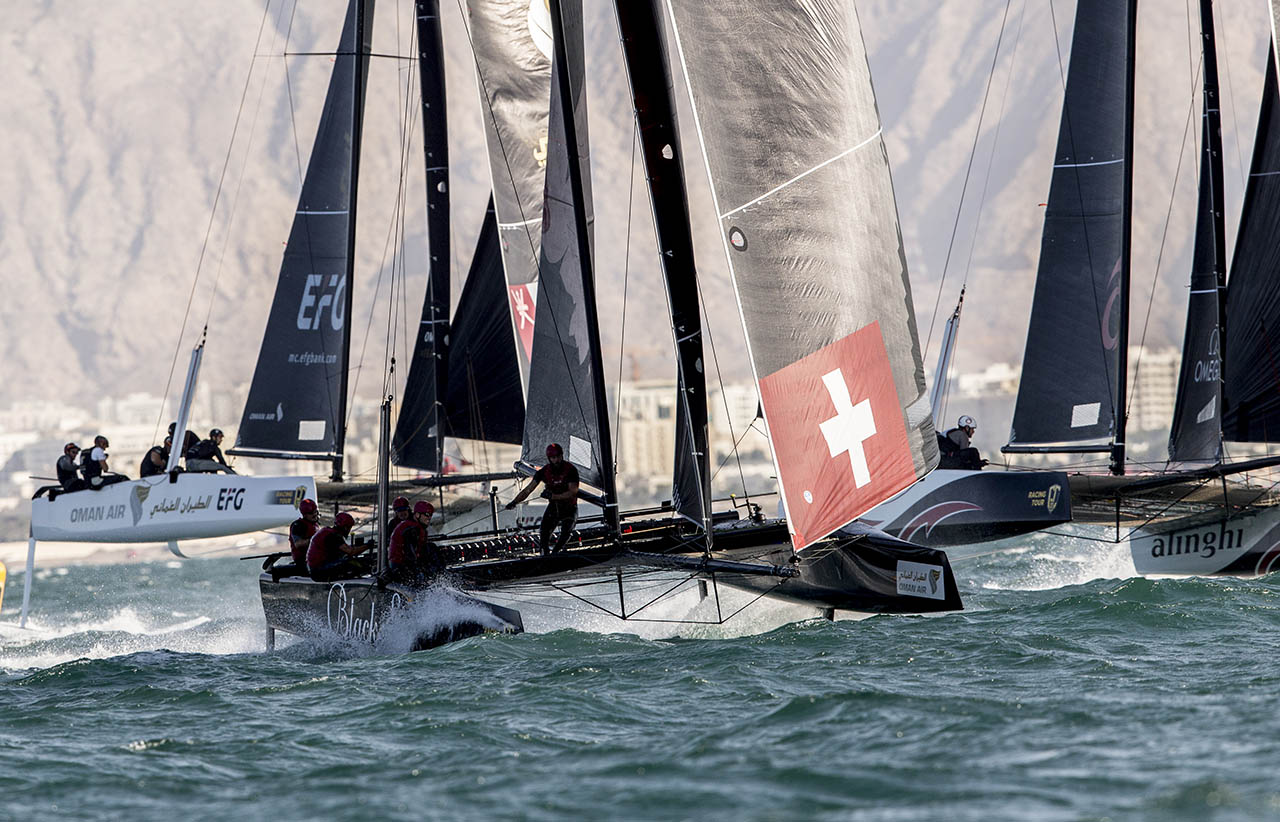 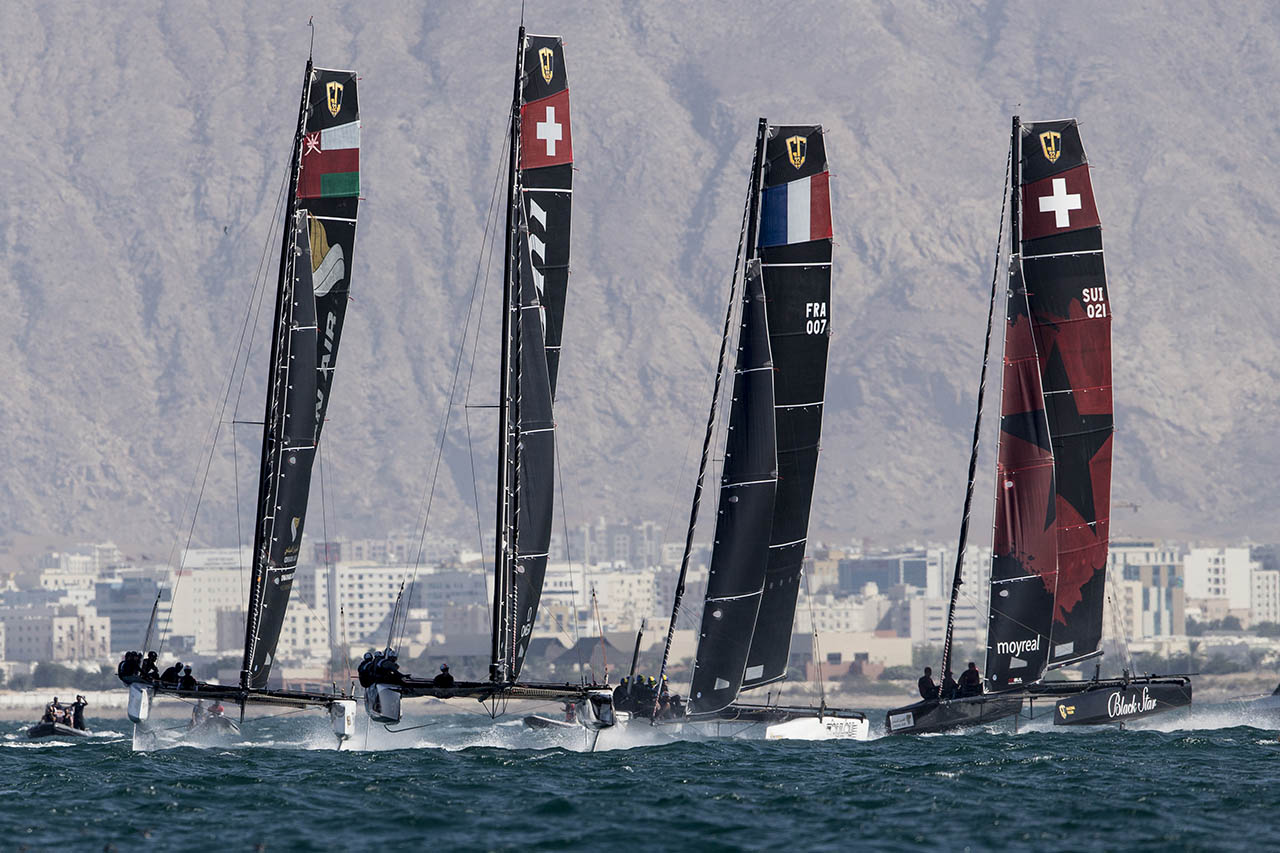 was fought for every inch. 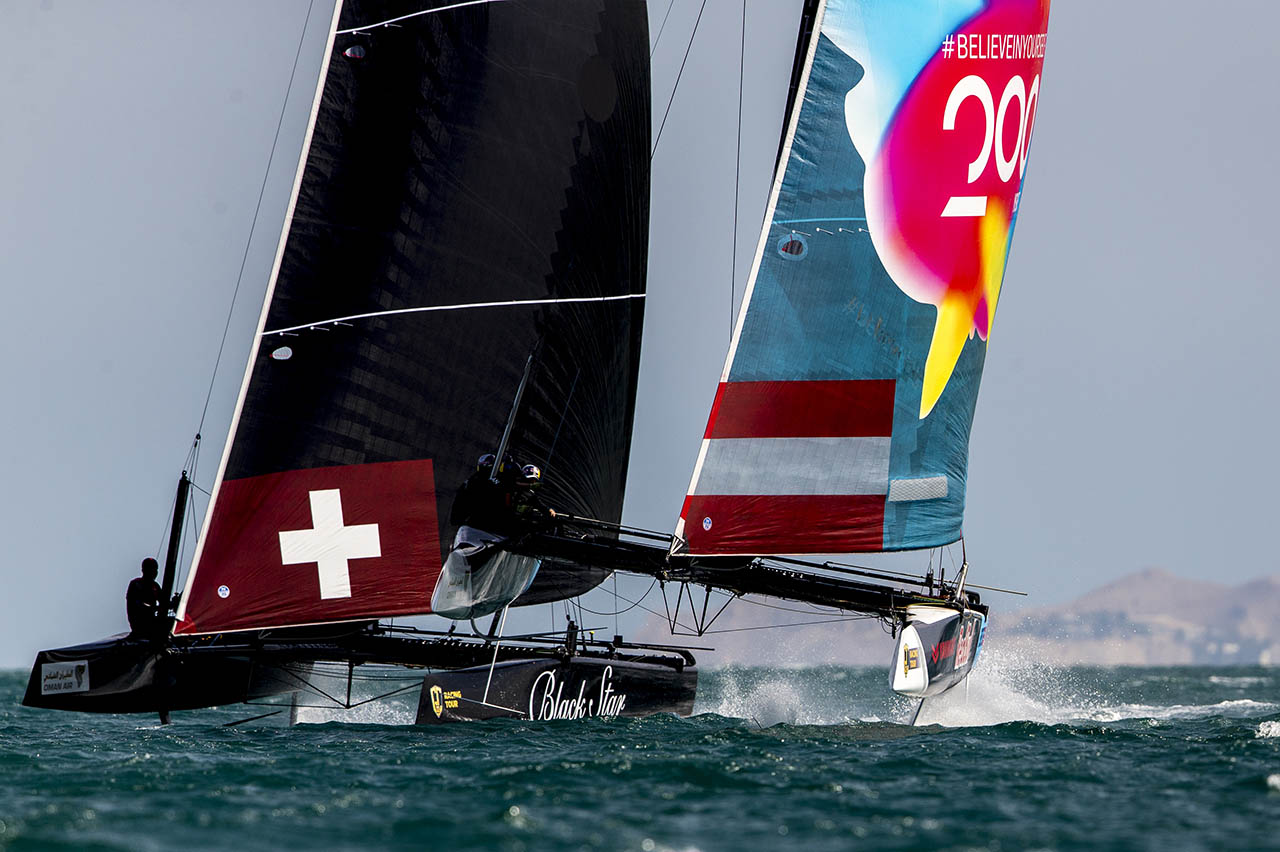 Showdown at the limit … 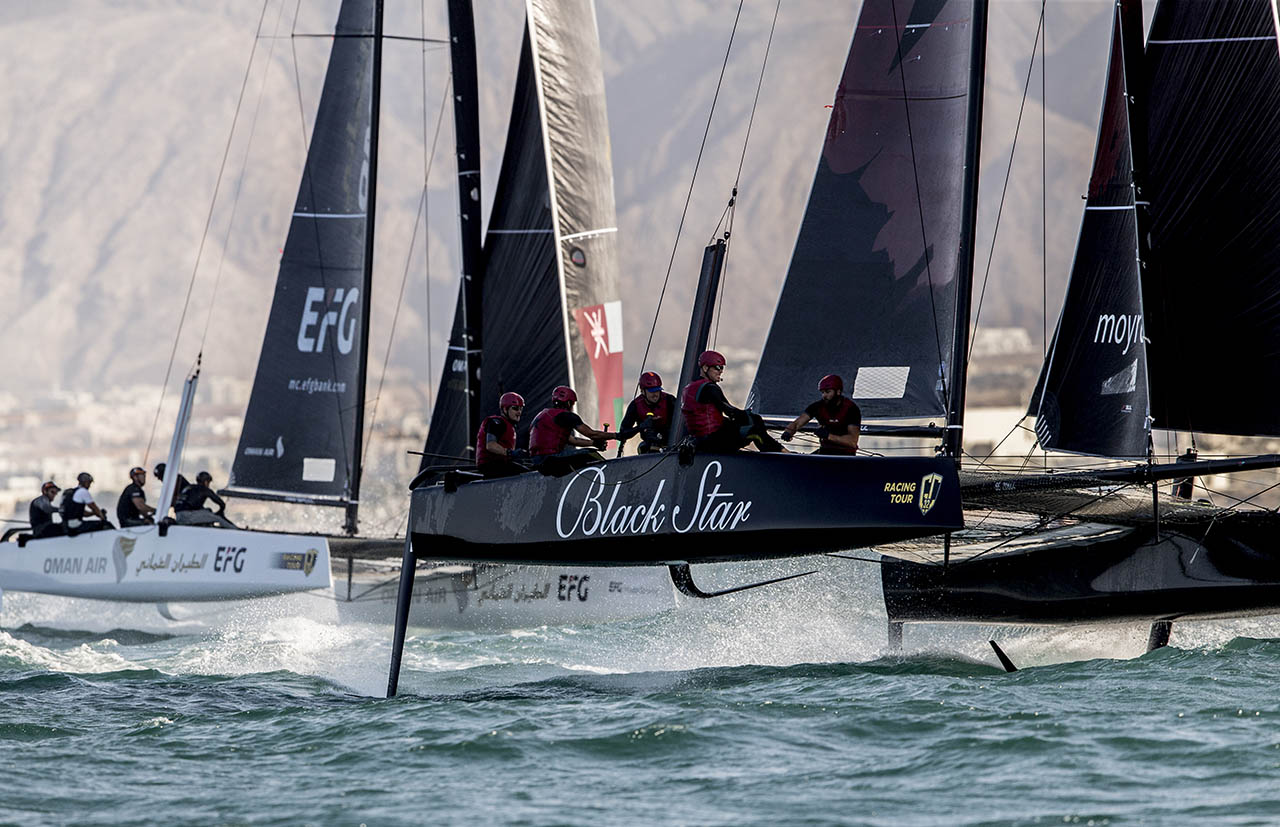 of which we could decide quite a few for ourselves, … 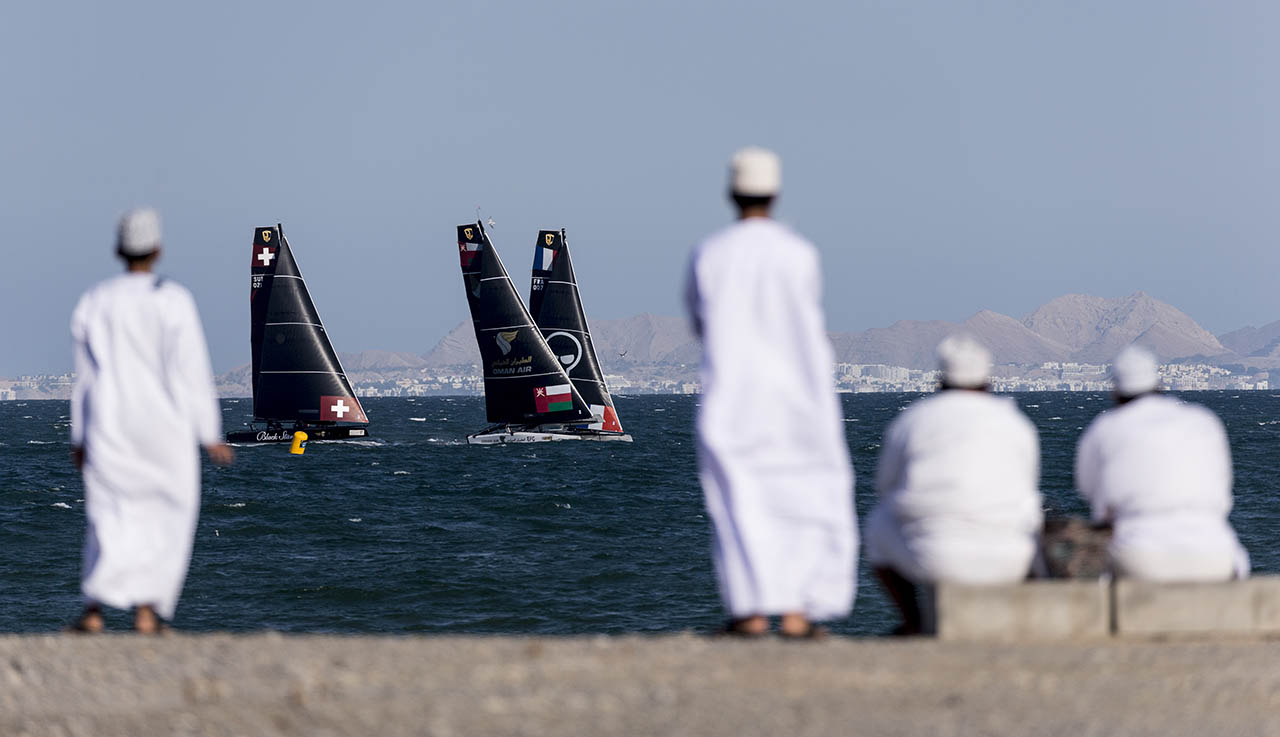