Last. But not least.

With the participation in the 44Cup World Championship in Slovenia, the Black Star Sailing event season is now coming to an end once the last two regattas of the GC32 Racing Tour have been cancelled.

Full of excitement and energy, we travelled to Portorož at the beginning of October, finally able to compete in this world championship with our own RC44 yacht. With the last place, we could not convert our ambitions into tangible results so far. Nevertheless, we are satisfied with our performance.

After the GC32 World Cup to the RC44 World Cup

There are probably not too many sports in which you can compete in several “disciplines” as a team and then also take part in the World Championships straight away. But let’s be clear about something: Although in some high-performance regatta classes it is possible to take part in a world championship without pre-qualifying, you will also meet the best teams of the world there. Consequently, winning one of these championships is always to be rated accordingly highly.

As an absolute “rookie team” in the RC44 class, we were not considered to be among the favourites at the 44Cup World Championship. Nevertheless, we hoped to set positive signs – and we succeeded. But let’s take it one step at a time.

After we had completed the first test strokes on the yacht in the Solent and were able to eliminate the first “teething troubles”, the remaining time until the yacht was transported away was used to install a new engine. Originally, the RC44 yachts were equipped with an “everyday” diesel engine. As our new yacht was waiting for a buyer for some time before we acquired her, parts had been taken from her engine in the shipyard to repair other engines. When she then passed into our ownership, it turned out that the procurement of the missing parts would be quite extensive. In the RC44 class, a switch to electric motors has been discussed several times for reasons of sustainability. As the completion of our yacht began to be further delayed due to delivery problems of other spare parts, it was obvious to also look for an alternative for the incomplete diesel engine. We decided without further ado to switch to electric drive and to get our newly purchased yacht underway with zero emissions right from the start. The use of an electric motor clearly brings us one step further in our efforts to reduce our CO2 emissions “over all”. As a new team in the class, we are also doing some pioneering work with this effort, and we are trying to support the other teams with our experience when it comes to replacing their engines.

Immediately after the installation, we made extensive test runs with the electric motor supplier to put the drive, which is new for this boat class, through its paces. Some adjustments had to be made, including the final weight: because the electric motor including batteries is lighter than the diesel engines used so far, we had to compensate for the difference with additional lead weights. In order to maintain equal opportunities, we have to give up the weight advantage of this innovation. Which we are glad to do, because in a “one-design class” it is sailing skills that should make the difference, not the pursuit of technical achievements.

After some challenges in transporting the yacht from England to Slovenia – it had to be imported into Switzerland first so that customs declaration could be done – we started the build late, too late. What happened: The contracted shipping company picked up the yacht three days later than agreed and did not follow the specified route. Since the yacht exceeds the specified maximum height of four metres on the transport rack, a permit must be obtained at the time of departure. What in principle is not a problem, however, presumably became more complex due to cost optimisation. In the end, the truck drove from England via France, Switzerland and Austria to Slovenia.

The entire team worked all night to set up the truck in record time, so that not too many of the planned training days were lost.

The weather forecasts predicted rather light wind conditions for the remaining training time. In order to get to know our yacht better and to refine the manoeuvres, we were not unhappy about the forecast. After all, these wind conditions correspond to what we know very well from our lakes in Switzerland.

With a ” push ” into the opening day

On the day of the opening of the World Championships, this familiar wind situation also awaited us. Promptly we started sensationally with a second place in the first race. Unfortunately, we were not always able to confirm this result in the following races and had our “ups and downs”, just like at the beginning in the GC32 class. But it turned out that the experiences from the regattas in Cascais and Marstrand helped us to deal with the situation. We were able to keep up with the competitive field while more and more often only a few metres separated us from the next rank. The closeness of the competitors was evident in a race where the race committee had to use drone images to rank the finishers. 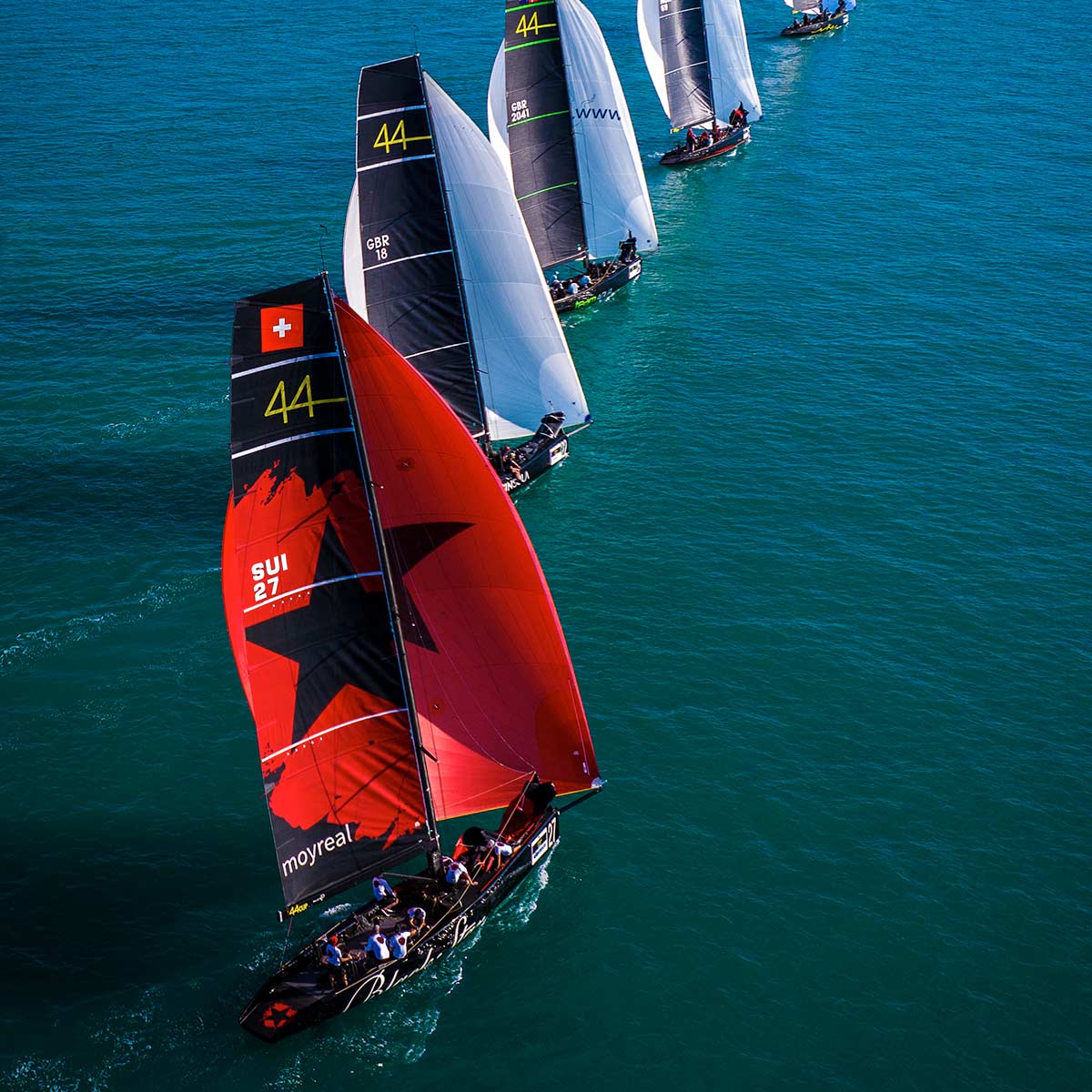 The last, but no longer beaten off

We are quite satisfied with our first participation in a 44Cup World Championship, as we were able to improve continuously over the four days of racing and we repeatedly achieved good runs. Like the first race on the opening day, we finished the last race in second place behind the world champion team Charisma.

Our improvement can also be seen in the points balance. Whereas at our first event in Cascais we still held the “red lantern” with a 27-point gap to the second-last team, our gap in Marstrand was much smaller with 17 points. We finished the World Championship again as last in the table, but only three points behind the team in front of us and only six points behind sixth overall.

The fact that the newly crowned RC44 World Champions finished the first race of the World Championship last in the standings clearly shows how high the level is in this class as well, and how quickly there can be shifts in the ranking.

The constant upward trend of the Black Star Sailing Team confirms that we are on the right track and that we can already sail the same speed as the other boats with the new yacht. So we are preparing with absolute confidence for the last regatta of the 44Cup, which will take place in Muscat, Oman at the beginning of December. The Black Star Sailing Team also has very positive memories of Muscat, as we laid the foundations there two years ago to go from a “rookie team” to a respected regatta team with the GC32 catamaran.

With the extended stay in the shipyard, we were also able to implement another special feature on the new Black Star Sailing Yacht: The intended design with the lettering deep below the waterline had to be elaborately worked into the paintwork, as otherwise the friction in the water would be too high. This was only made possible by the stretched timing. And so we are pleased that the Black Star Sailing Team was able to set some positive visual accents in addition to the race results. The eye-catching yet elegant design of the new yacht stands out in every photo. We are correspondingly proud of our new bijou – and the “yield” in our photo gallery, which is now available for our fans and interested readers on our website, is correspondingly larger.

to the RC44 photo gallery
to the 44Cup results